How old is the Western Wall

The Western Wall in the southwest of the old city of Jerusalem is the last remnant of the Jewish Temple, the most important Jewish sanctuary, which was destroyed by the Romans in the year 70 AD except for the surrounding walls. Part of the western wall lies in the Jewish quarter and is an important place of prayer. In Hebrew, the Western Wall is called "Hakotel hama’avari" (the Western Wall) or simply "Kotel" (Wall). 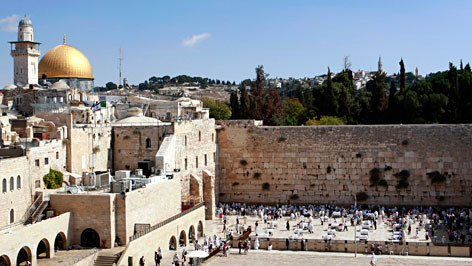 The Wailing Wall ..... On the Temple Mount are the Dome of the Rock and the Al-Aqsa Mosque, which are sacred to Muslims.

The term Wailing Wall refers to the lamenting of the Jews about the destruction of the Second Temple in AD 70, although the term is only common among non-Jews. Jews use the Hebrew word "Hakotel hama’avari" (the western wall) and in English "Western Wall".

Since the destruction of the Second Temple, the Western Wall has been used by Jews as a sacred place of prayer. The wall is closest to the holiest, the Temple Mount, on which the Muslim Dome of the Rock and the al-Aqsa Mosque (completed in 705) have stood since the 7th century. At the time of the First Temple, the “Shekhina” (divine presence) lived in the sanctuary according to Jewish ideas. Nowadays, therefore, prayer in front of the Western Wall is considered particularly valuable. Even today, the wall made of the great stone cadres is a pilgrimage site for Jews from all over the world and a magnet for tourists. The Western Wall is particularly busy on public holidays and at the beginning of Shabbat on Friday evening. 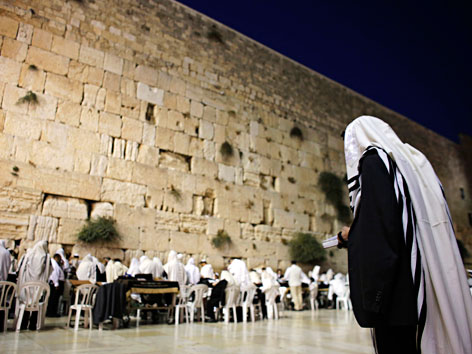 A particularly large number of Jews pray at the Western Wall on Shabbat evenings and on public holidays.

Visits are also possible for non-Jews

When Jordan captured the Old City of Jerusalem in the 1948 War of Independence, the Israelis lost access to the Western Wall. Only after the reconquest in the Six Day War in 1967 were Jews able to pray in front of the Western Wall again. The houses, which until 1967 came right up to the wall, were sanded down and a large forecourt was created. At all entrances, visitors have to go through security checks. The visit is possible around the clock and free of charge. Non-Jews are also allowed to visit the Western Wall, provided they are appropriately dressed. Men must also wear a hat, either a hat or a kipa, which can also be borrowed.

For prayer, a strip about 30 meters wide is divided off in front of the Western Wall, divided into separate areas for men and women. Many believers and tourists stick notes with prayers and personal wishes in the cracks between the stone cadres. 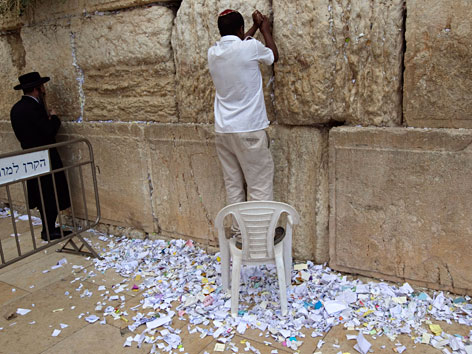