Who was Naruto's first kiss 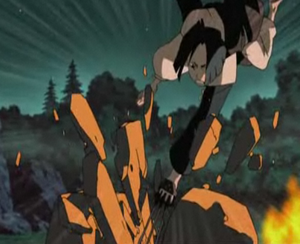 At the beginning of the episode, Sora and Furido talk to each other. Just as Sora trusts him, he notices through the smell that it was Furido who stole the corpses and attacks him. But the latter skilfully evades and says he wants to solve it peacefully. But Sora ignores it. So they fight each other. Meanwhile, Naruto still has Fūka on his neck, who persistently pursues and attacks him. Sora and Furido are still fighting each other and Furido manages to convince Sora that he is fighting with his true strength. In doing so, he devastates his surroundings, but no longer remembers it.
Sakura and Sai are looking for Naruto and the rest. But Sai is weak because the poison of the spider spreads in his body. In the meantime, Naruto is still fighting Fūka and annoying her because he has cut off some of her hair with the help of some shadow doubles. 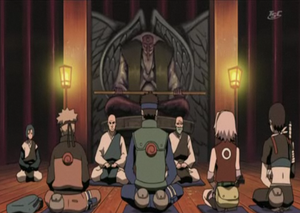 The monks and the Konoha-Nin discuss the situation

She then petrifies his legs and gives him the kiss of death, during which she sucks out all of his chakra. When Sakura and Sai bump into them, Sakura gets angry when she sees Naruto kissing Fūka and attacks them. But Fudō and Fuen, which suddenly appear, block her way.

Shortly afterwards, Yamato also joins them, but Fudo managed to lock them all three in an earth prison. Meanwhile, after the Naruto chakra, Fūka accidentally sucks in that of the Kyūbis, which she cannot absorb and thus falls down screaming. Meanwhile, Furido explains why he stole the bodies and who he is. But Sora senses that Naruto needs help and rushes to him. The two want to fight against Fūka, Fudō and Fuen, who has also joined them, but they withdraw with Furido when Chiriku and the other monks come to the rescue.