How does the MP counseling work

Basics of the MPU and its misnomer, idiot test

About the subject MPU A lot has been said and written, including a lot of nonsense. Fear of it is often fueled by unnecessary and false claims. Idiot test as a term for it is wrong, dangerous and is mostly only used by people who have little idea about it. People for whom the MPU was ordered (mostly after a Driving license withdrawal), have disappointed the trust granted to them by the authority. When issuing a driving license for the first time, the authority trusts that driving license applicants are suitable. Usually alcohol or drug trips, perhaps too many Flensburg points due to traffic offenses or aggressive behavior in traffic, are the reason for the character's suitability doubts. In order to dispel these doubts, the authority must be convinced of the (re) - established suitability. This requires a change in behavior and other evidence. Proof of suitability can be provided by a positive "medical-psychological examination". Work, change and preparation are basic requirements for a positive result. If you already have a negative report, you have to work harder on yourself. He still has to make more preparations for a new "assessment of fitness to drive". Otherwise, why should the second MPU be better? Sometimes, for a positive result, in addition to the medical and psychological issues, other - often more time-consuming and long-term prerequisites must be observed, without which it simply does not work. A MPU advice and intensive MPU preparation should therefore start early. For years, our competent specialists have been helping with serious MPU help and by the skilled MPU preparation. Every interested party receives a free info call,plus individual tips on the MPU

We have been running the Training as a driver aptitude advisor / MPU advisor by. As a rule, this training is done by psychologists, educators, driving instructors and others from professionally qualified professional groups - in order to then be successful as consultants in their region.

Procedure of the medical-psychological examination: 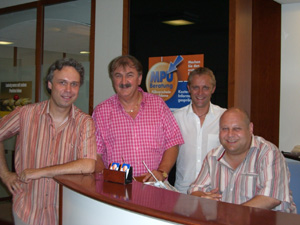 For the creation of the MPU report the following four components must be completed and evaluated by the two reviewers, the doctor and the psychologist (Various sample reports):

A-Questionnaires serve to identify any existing health problems and basic requirements. MPU preparation and all efforts that have already been made should be reported. Among other things, a therapy, self-help group or addiction counseling, also the visit of Advice centers - alcohol or Advice centers MPU. This information is compared with the statements made by the doctor and psychologist. Of course, this questionnaire has nothing to do with unfair offers such as "MPU preparation online or MPU questions Catalog "to do.

B-Performance tests on the computer test device. Speed, accuracy, concentration, stamina are tested through tests such as line tracking, recognizing and noticing traffic situations, etc., whether applicants still have the required performance in traffic. Preparation for performance tests is not really desired. Poor performance in this sub-area of ​​the medical-psychological examination (computer performance test) can occur in a so-called MPU driving behavior monitoring be balanced.

C-Medical examination The doctor will conduct a medical examination to determine whether you are fit to drive. In doing so, event-related (e.g. alcohol, Btm.-abnormalities, drugs, medication) are carried out and findings are collected. Under certain circumstances, it is essential to be already preparedFindings or values to bring to the examination. The expert is not a detective, i.e. values ​​that do not "fit" require a doctor's explanation in advance and possibly additional values ​​and findings. During a medical-psychological examination for alcohol, blood is examined and blood values ​​/ liver values ​​are determined. If there is a drug question (including medication), a urine screening is done, but proof of abstinence is required for the time before. Which period depends on the case and drug? If anything is unclear, it would be possible to extend the investigation to other areas (suspected shift of addiction). So here, too, you need to prepare before going to the MPU.

Many people find this part of the assessment incomprehensible. Candidates often fail to understand that the hour-long interview allows them to be judged. It is important that you do not lie when preparing the report. An experienced appraiser will dismantle a story of lies in no time. Hardly any other professional group is lied to as often as the experts. It must be explained why one behaved wrongly in the past, that and how attitudes and behavior changed. There should be convincing reasons that make another crime unlikely - just claiming not to do it anymore is not enough, that will be clear to everyone. It is often due to a lack of preparation that important factors may not be addressed during this conversation. At the end, the candidate receives the recorded conversation for signature. This is the last chance to make a change. Usually you already get a positive or negative tendency towards the expert opinion - result said. About 1 - 2 weeks later it will be sent by post, it is advisable to receive both copies yourself and to bring one to the driver's license office yourself.

As mentioned at the beginning, the term idiot test is wrong and inaccurate. The term idiot test even tempts people to go to the assessment completely unprepared. Usually they quickly notice that the "medical-psychological examination" is something completely different. Since 1999, the BASt's "Assessment Guidelines for Driving Suitability" and the "Assessment Criteria" have been regulating the quality requirements for medical and psychological examinations. There are now clear requirements for a report to be positive or negative. This applies to all investigation occasions (alcohol, Btm. -Cannabis / hard drugs, Flensburg points, aggressive behavior, etc.). Training on the assessment is neither desired and usually not possible. MPU training programs or idiot test training programs as some promise, are expensive but unsuccessful.