When a high pulse is dangerous

The heart does its job unnoticed: second by second, minute by minute, it pumps enough blood into the circulation. "The optimal resting heart rate for a healthy adult is 60 to 70 beats per minute," says Dr. Barbara Richartz, resident cardiologist in Munich. Much faster, with well over 100 beats, it works with small children, but in old age it usually beats a little slower.

Knowing your personal resting heart rate helps when assessing a heart that appears to be fast. For example, people with a low resting heart rate perceive faster frequencies as annoying earlier than those whose heart generally beats a little faster. Take competitive athletes, for example: "A trained heart beats slowly at rest, around 50 times a minute," says Professor Ellen Hoffmann, chief physician at the Cardiology Clinic at the Munich-Bogenhausen Heart Center. "If the frequency rises to 90, some athletes have the feeling that their heart is racing, even though the value is still within the normal range." Untrained adults, on the other hand, often only find frequencies of 130 beats per minute or more disturbing.

Usually a fast pulse is harmless and nothing more than the appropriate response of the heart to stress. "Certain situations require the heart to beating faster in order to pump more blood into the circulation," explains Richartz. During physical exertion, for example, the muscles need more oxygen. To deliver this, the heart beats faster. What serves as a guide value for the upper limit of the heartbeat during sporting activities varies somewhat from formula to formula. Many sports doctors say: 220 strokes minus age is a good guide. A healthy 40-year-old can expect his heart to beat 180 beats per minute while exercising, while a healthy 80-year-old should not exceed the 140 mark.

But other stresses also accelerate the pulse. For example, a fever. When the body temperature rises, the blood vessels widen. The heart beats faster so that the blood pressure does not drop. "A rise in temperature of one degree Celsius increases the resting heart rate by 10 to 15 beats," confirms Richartz. And of course the heart also reacts to psychological stress: under stress, the body releases hormones that accelerate the pulse rate. The heartbeat sometimes reaches similarly high values ​​as with intense physical exertion.

"A gradual increase in the pulse rate is typical for normal adaptation to stress," explains Professor Hoffmann and adds: "At the end of the stress, it should then slowly decrease again." Such a racing heart may worry some people, but doctors are especially worried when it suddenly starts out of nowhere. "Patients often describe it as if a switch were thrown," reports Hoffmann. Cardiologists speak of the so-called on-off phenomenon. Because just as abruptly as it begins, the racing heart usually stops again - after minutes, hours or even days.

These escapades can be accompanied by complaints: In addition to a throbbing in the chest, which doctors call palpitations, many sufferers feel weak and uncomfortable. Hoffmann says: "If it is difficult to breathe, chest pain occurs or the lawn never stops, then it is important to seek medical help immediately." Finally, medical emergencies such as pulmonary embolism or heart attack sometimes express themselves in this way. Ventricular fibrillation can also threaten sudden cardiac death.

Palpitations can have numerous causes. Sometimes a rapid heartbeat, which starts suddenly and ends abruptly, is a disruption of the electrical conduction in the heart. "These phenomena are more likely to occur in younger people and can be treated well with what is known as catheter ablation," explains Richartz. Cardiologists use the leg vessels to insert a probe into the heart to bury the areas with electricity that are causing the arrhythmia.

Palpitations in young and old people

Another form of palpitations affects older people in particular. They have malfunctioning atria, the areas of the heart that normally fill the chambers of the heart with blood. "Atrial fibrillation increases sharply with age and affects around 15 percent of people over the age of 80," says Hoffmann. The atria, which beat extremely quickly and in an uncoordinated manner, accelerate the heartbeat - mostly to frequencies between 130 and 150 beats per minute. Doctors first treat atrial fibrillation with medication. If that doesn't help, sclerosing by means of catheter ablation, i.e. a probe, can be a therapy option here as well.

If the atria play crazy with younger people, the "Holiday-Heart-Syndrome" is behind it. "Palpitations typically start six to seven hours after a long party with heavy alcohol consumption," reports Hoffmann. The throbbing in the chest often lasts for hours before disappearing. To be on the safe side, you should also have this racing heart examined by a doctor. If no other causes are found, treatment is to avoid the triggers - electrolyte loss and alcohol. 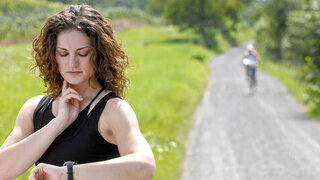 Sport: what role the pulse plays

In order to protect the organism from overload, one should exercise on the optimal heart rate ...