What does it mean?

Esophageal mobility disorder(Esophageal motility disorder): Collective term for less common diseases of muscles and nerves of the esophageal wall with disturbances in the transport of food. Typical symptoms are cramp-like chest pain and difficulty swallowing. Treatment is difficult, with anticonvulsant drugs, but surgery is often unavoidable.

The most important forms are Achalasia, in which the mobility of the esophagus is reduced, as well as the diffuse esophageal spasm and the Nutcracker esophagus (hypercontractile esophagus), for which an increased strength or frequency of contraction of the esophagus is characteristic, i.e. the esophagus does not open far enough for a pre-chewed bite of food to pass without problems. The course of the disease and the success of the therapy depend on the causal dysfunction. Patients with achalasia are 30 times more likely to develop esophageal cancer.

In the next few days if

Achalasia is based on damage to the nerve plexus (myenteric plexus) in the lower esophagus. As a result, the esophagus is only mobile to a limited extent, and the lower sphincter muscle (esophageal sphincter) cannot slacken sufficiently during the passage of food, so that the chyme does not or only partially reaches the stomach from the esophagus. Those affected feel crampy chest pain and have difficulty swallowing. At night, the undigested food often flows back into the oral cavity. The difficulty swallowing leads to the fact that the sick eat less and less and lose weight. 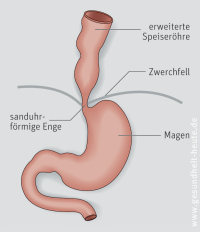 Strong spasmodic contractions in the middle and lower area of ​​the esophagus that do not have a propulsive effect on food are typical of diffuse esophageal spasm. Elderly people in particular suffer from the disease, which is associated with severe attack-like pain in the chest area, which is similar to that of angina pectoris, but unlike angina pectoris, it occurs irregularly and not dependent on exertion.

In the nutcracker esophagus, the lower part of the esophagus contracts extremely long and strongly. Due to the contraction of the esophageal muscles, chunks of food easily get stuck, which leads to an uncomfortable bolus feeling. As with diffuse esophageal spasm, the lower sphincter functions normally. Often there is also a backflow of the stomach contents.

With an X-ray contrast medium examination (esophageal swallow), the doctor determines the type of esophageal contraction disorder. The esophageal pressure measurement shows him how severely the mobility of the esophagus is disturbed. In order to rule out cancer in the stomach entrance, the doctor usually also carries out a gastroscopy and esophagus, including taking tissue samples.

Are to be excluded

Operative treatment. To improve the transport of food from the esophagus to the stomach, doctors use a balloon catheter to stretch the lower sphincter muscle (Balloon dilation). The procedure is carried out endoscopically and is usually successful, but not without risk: tears in the esophagus are particularly feared. In addition, in a third of patients, the expansion must be repeated after 1–5 years.

Endoscopic injection of botulinum toxin into the lower sphincter muscle of the esophagus has proven to be an alternative. The nerve poison partially paralyzes the muscle so that the opening to the stomach becomes wider and thus more accessible for the food pulp. The treatment is well tolerated, but has to be repeated every 6–12 months.

If both treatment methods remain unsuccessful, the doctor usually recommends the surgical one Cardiac amyotomy. The thickened muscles in the area of ​​the stomach entrance (cardia) and on the lower sphincter of the esophagus are incised lengthways.

A newer method is the splitting of the thickened muscles via the endoscope, the so-called peroral endoscopic myotomy (POEM). It shows good results in some forms of achalasia, but a final assessment, also in comparison with the established methods, is still pending.

Even if the surgical therapy successfully alleviates the symptoms, the risk of esophageal cancer remains. Therefore, regular endoscopic check-ups are necessary.

Medication. Calcium channel blockers such as nifedipine (e.g. Adalat®) help some patients who do not want invasive therapy. Calcium antagonists let the muscles relax, including the cramped muscles in the lower part of the esophagus. For this, the drug is taken half an hour before a meal. However, the effect only occurs in a few affected people and only for a short time.

Calcium antagonists (e.g. Adalat®) and nitro preparations (e.g. Corangin® Nitrospray or Nitrolingual® capsules) help relieve cramps. In both diseases, the injection of botulinum toxin into the muscles of the esophagus alleviates the symptoms for a few months; however, permanent freedom from symptoms is not to be expected. In very severe cases, as in achalasia, it may be necessary to split thickened muscles, the so-called myotomy.

There is unfortunately no cure for esophageal movement disorders, but the various treatments available can relieve symptoms and prevent complications. Regular check-ups are particularly important for achalasia in order to detect impending esophageal cancer at an early stage.

What you can do yourself