What is a drumstick

The most famous hand drums are those Bongos. Bongos (from Spanish: singing the bongo) are drums of Afro-Cuban origin that were introduced into Cuba by African slaves during the colonial era. They are always used in pairs. Its sound body is made of metal or wood, slightly conical, each with a batter head, while the drum is open at the lower end. They are tuned differently to one another: in intervals of thirds to fifths.

The game is played with the flat ball of the hand, the fingertips or with timpani or wooden sticks. A remarkable virtuosity can be achieved using a special palm and finger technique. Thanks to the spread of Latin American dance music, they have become a household name for almost everyone and have moved into the modern orchestra. Their rhythm accentuates the cha-cha-cha, gives the salsa its swing ... 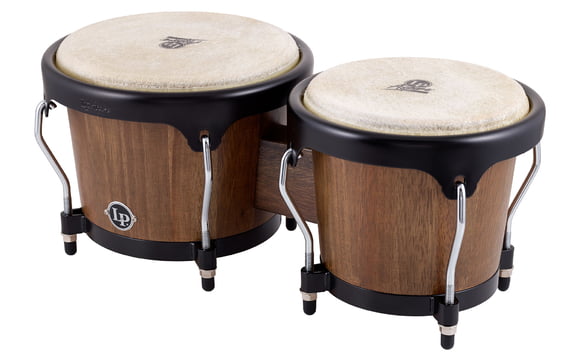 As Djembe (pronounced ´Tschembi´) is the name of the characteristic beaker drum of the Mandingo ethnic group of Guinea. It is probably the most popular drum from Africa. The chalice-shaped wooden drum is covered with a shaved goat skin. When playing, it is held around the neck by a strap and played with both hands. Sometimes 1-2 metal plates are attached to the trunk, on which several iron rings are attached, which vibrate when playing. When playing, the touch in the middle or on the edge of the skin sometimes creates unfamiliar sound nuances, some of which may appear to the European understanding of music as 'impure' tones. This is due to the fact that the aesthetic understanding of sound in instrumental and vocal music in Africa and Europe is essentially different. An important reason for this is that musical instruments in Africa are not just used to produce music. That is why the focus is not on purity of sound and melody perfection, but many musical instruments still have a primarily social role in everyday life to this day.

As a percussion instrument in modern music today, the djembe is struck with the hands, whereby the different timbres (deep bass, medium open and high slap) are generated by differentiated hand positions on the skin. This allows the djembe to be used as a solo instrument and as an accompanying instrument. 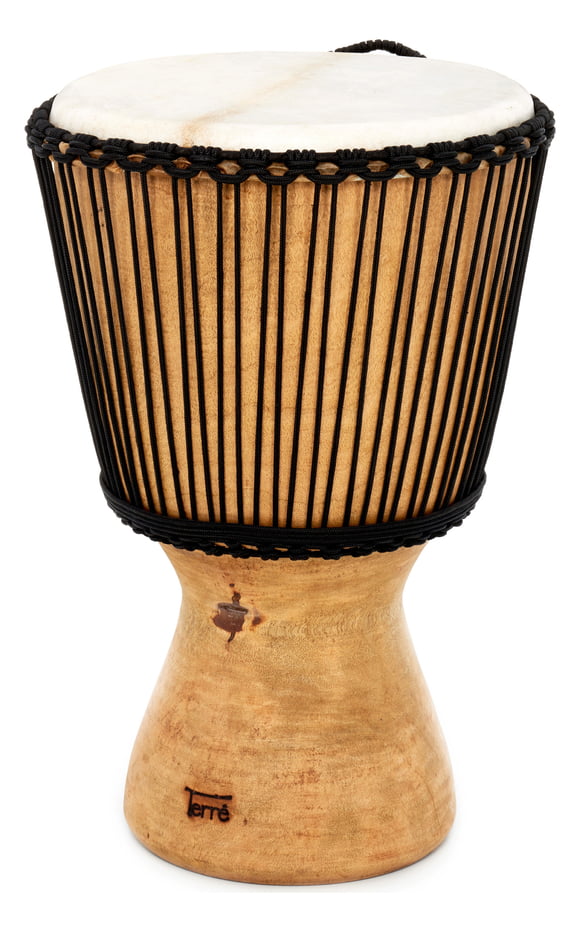 At first glance it comes Bougarabou (pronounced ´Bugarabu´) very close to the appearance of a Djembe. It is also provided with a simple and understandable cord tensioning system. Their shape and the cowhide covering characterize their warm, earthy sound, which is reminiscent of the sound of a conga. The tone spectrum ranges from deep, bassy sounds to high tones similar to a small conga. The sharp, whipping sounds that can be achieved on bongos or on the djembe are completely absent with the bougarabou. 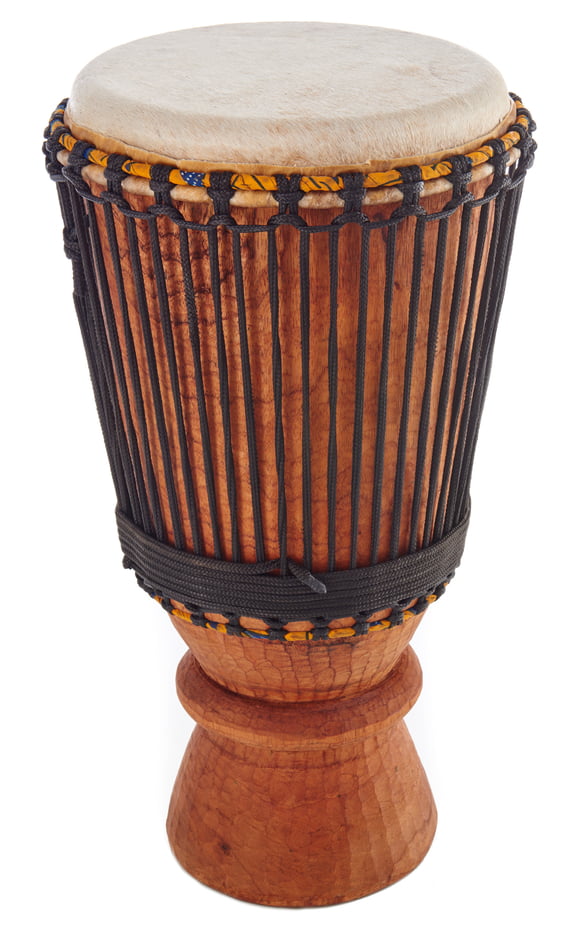 The Tabla is an asymmetrical pair of small drums that were found in central and northern India, Bangladesh and Pakistan. It is the combination of a conical and a cylindrical drum, each covered with a skin and tuned differently. The membrane pressure and the pitch of the actual tabla or dayan played with the right hand is changed by means of leather straps in that the player hits a wooden peg under the strap with a hammer. A black point (made of cast iron dust and rice) is applied in the middle of the membrane, which guarantees the purity of the sound. The other drum, the bayan played with the left, is stretched by cords, whereby the skin tension is regulated by small copper rings. Strike sequences, strike shapes (palms, wrist, fingers, fingertips) and strike points are very differentiated and, when combined, create a truly unusual sound cascade. The tabla is the main rhythm bearer of classical Hindu music and accompanies singing as well as instrumental and solo play. 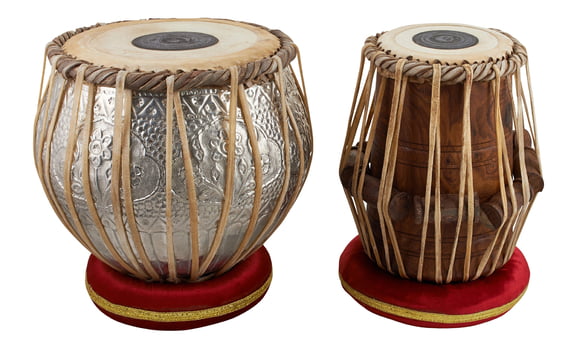 The Darbouka (from Arabic) is a single-headed tumbler drum, predominantly found in the Islamic regions of Asia as well as in the Middle East and North Africa. Manufacturing materials are mainly wood or metal. In Asia, the player holds them under his left arm while standing or between his thighs while sitting. There are two ways of striking: slightly subdued with the left and strongly with the right. The darbouka is just as well known in the classical as in the folklore ensemble as well as in street music. It exists in many countries under various names and variations: as Dümbelek in Turkey, Dombek in Iran, and Dombak in Persian art music. In the European orchestra she became Arabic drum. 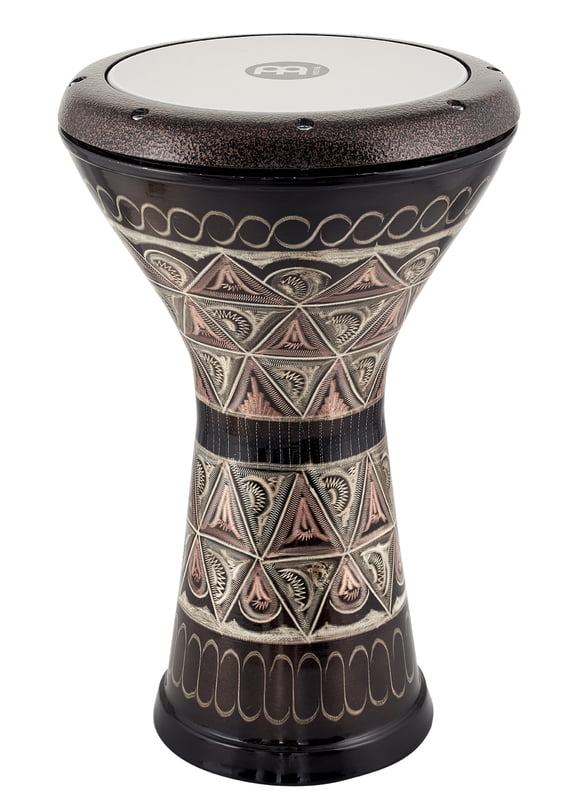 The ´speaking drums´ resp. Talking drums (e.g. kalengu with the Hausa / Nigeria, dondo with the Akan / Ghanas) are double-headed hourglass-shaped drums. Via a system of strings that connect the two skins to each other, one brings them to ´speak´ by changing the pressure between them. Pebbles in the drum still have a faint rattle effect. With the instrument under his arm, the player presses the 'speech' out of the drum. It imitates the spoken language.

In West and Central Africa it occurs in pairs of different sizes, which stand free and whose ´voices´ complement each other. They are beaten with a curved mallet. This clearly reflects the close relationship between the phonetic curve of speech and the melodic curve of sounds. Thanks to this characteristic, the talking drum is used in remote, traditional cultures in Africa as a means of communication in the sense of our mass media, such as by the Akan of Ghana. 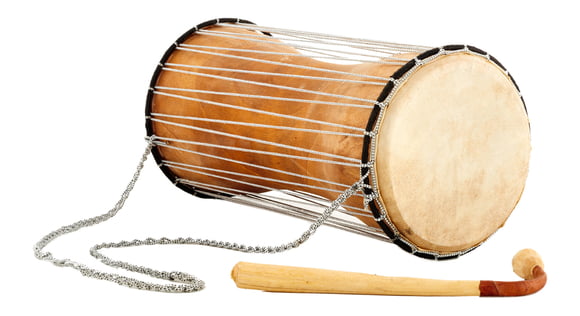 The DoumDoum (pronounced ´dumdum´) is the ´heartbeat´ among the African drums. The Doum Doums or bass drums are strung with 2 hairy cowhides. These drums can be easily tuned with the cord tensioning system. The DoumDoums are played with a crook. Traditionally there are 3 sizes: Kenkeni (approx. Ø30cm), Sangba (approx. Ø36cm) and Djunumba (approx. Ø40cm). The DoumDoum is mainly used as a bass drum accompaniment for the djembe. 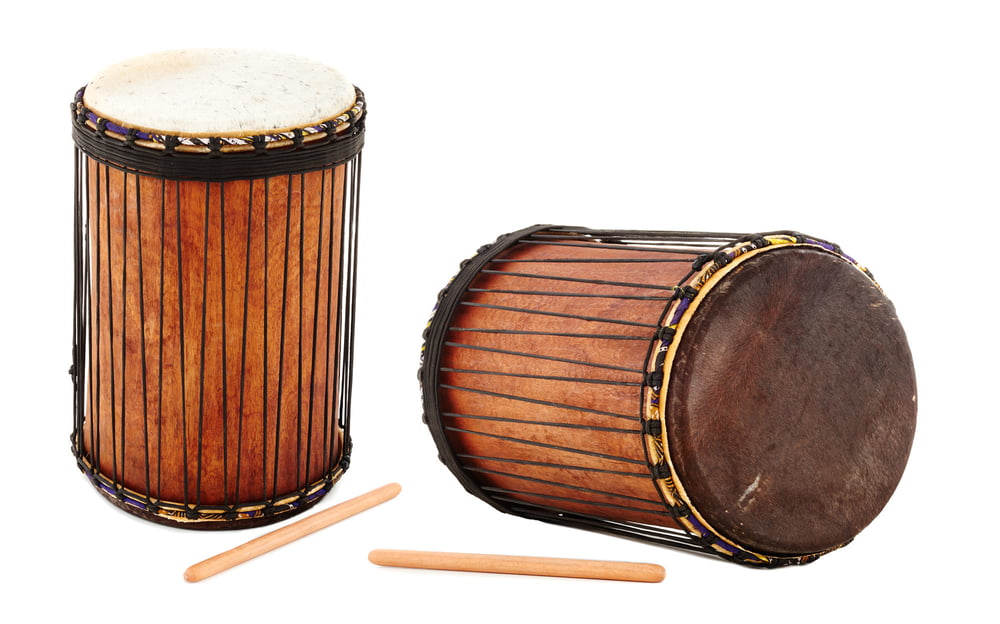