Has anything drawn you from your childhood?

"They were the on-off relationship of my childhood"

In his recently published comic debut "Three Fathers", Nando von Arb tells over 300 pages from a child's perspective of growing up in an unusual blended family with three father figures. In allegorical pictures, which find graphic equivalents for the child's psyche, desires and emotions, he deals with social notions of father and male roles. We present the press interview with Nando von Arb conducted by Filip Kolek with the kind permission of Edition Moderne. 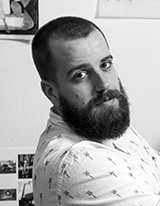 At the beginning, could you tell us a little bit about yourself and your artistic career? How did you get into (comic) drawing and what does the medium of comics mean to you?
I was born in Zurich in 1992, where I still live and work. Various influences brought me to drawing, but as with everyone it was probably the parents, the teachers and other role models. Several of these role models advised me to take the preliminary course and an apprenticeship in graphics after finishing secondary school. For the grammar school I was not interested in most of the subjects, and I was probably too lazy. So I did the preliminary course at the vocational school for design, since then I definitely knew that I would choose an artistic career. I found an apprenticeship in Zurich, luckily my teacher at the time forced me to take my vocational baccalaureate.

After my apprenticeship in 2012, I worked independently for three years, first voluntarily and then out of defiance. In 2013 I applied for the illustration class in Lucerne. However, I was not accepted. But that same autumn I was able to exhibit at Jungkunst, which temporarily saved me from the hole that left the disappointment of this rejection. I would say it was a success. In 2015, however, I felt this frustration rise again in me, I feared that I would not develop any further and realized that I was again ready to face the jury in Lucerne. This time it worked. During my studies, I was most enthusiastic about picture narration and comics in all forms. For my theoretical bachelor thesis, I analyzed two comics with an autobiographical foundation. The first version of “Three Fathers” was my practical bachelor thesis. Since then I have been working independently in Zurich, until now mainly on the book. If everything goes well, I will start my Masters in Comics and Illustration in Ghent, Belgium, at the end of 2019. 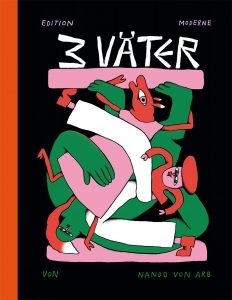 How did the idea for “Three Fathers” come about? How long did you think about talking about your childhood and your family?
I had the first ideas for the book when I fell asleep, sometime in late 2017, I was melancholy and had previously drank a little too much red wine. I thought about my family and how the different role models - not just the fathers - had influenced me in my life. I remembered and imagined situations in which my different fathers reacted to the same things. How they all took on a different role in my life, how different they are, what connects them and what separates them. This is how the title “Three Fathers” came about, which I immediately wrote down on my cell phone. So at the very beginning there was actually the title, and I built on that. That same night I made quick sketches of my ideas. My mother should also play an important role in the book. My first idea was to build the project around them. The second sketch was an almost schematic representation of three men carrying a coffin. Death and the fear of it were an almost subconsciously integrated part of the story from the start. At the time, however, I didn't know that a graphic novel would emerge from it.

In the center of your story, next to your mother, who you always portray as a protective bird creature, are the three eponymous father figures, your biological father, a wolf figure in androgynous clothes, Kiko, the biological father of your big sister, a kind of harlequin with stilted legs and zelo, your mother's new partner, whom you have given an archaic golem body. Can you tell us something about these three people and their drawn counterparts? What was your relationship with them? What did and do they stand for in your life and in your story?
When I decided to do a comic about my childhood, I quickly realized that I would not draw my family the way they really look, but how they affect me. Since I wanted to deal with my own story uninhibitedly and freely, I had to alienate my family. That allowed me to keep a certain distance. That way I could be more honest. I made a lot of different sketches of the characters and so I got closer and closer to the beings that would represent my family. I knew I would have to draw them often, so I needed to be able to draw them quickly. At the same time, they had to be easily distinguishable so that I could have a free, spontaneous stroke and would not get too lost in details. I wanted to be able to show the memories immediately. The fact that my sisters and I only differ in our hairstyle is because I see each other as a unit in the story. The book is supposed to be about the fathers and the mother.

There are three parties: the children, the mother and the fathers. However, many tensions also occur within these parties. Children against children, mother against herself and, above all, fathers against each other. Of course, you can't show everything in a three-hundred-page book, it doesn't contain my whole life, but I think you can feel the relationship that the parties have and had with one another. The book is only vaguely structured like a story, I see it more as a kind of essay, a walk. 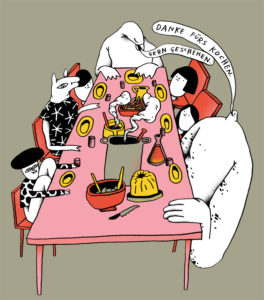 In addition to the topic of father / parenthood, your debut also deals with the topic of masculinity and the construction and projection of masculinity by your three father figures on many levels. Can you tell us something about this aspect? What specifically interested you in this discourse? What role did this topic play for you in growing up?
Until I was eight, I only lived with my two sisters and my mother, so the male role models weren't a permanent part of my early life. They were the on-off relationship of my childhood. Sometimes they were in abundance, sometimes they were gone. Masculinity was - logically - automatically a main theme in the book. In the book I show decisive situations from my life. For example circumcision, but it's not necessarily about masculinity, but rather about fear. Since the most important male roles in my life were my fathers, I mainly learned from and through them what a man is. Also through their negative sides. I think if we look at the three father figures in the book, each has its part of the countless aspects of it covered. But I think I learned more from my mother and sisters. I have always seen them as a greater authority and more rightly what they said. 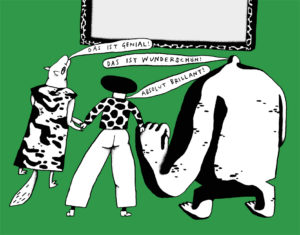 In a key sequence you can be seen painting. Your young alter ego draws a hybrid figure made up of the three father figures and your mother on the canvas. Here it seems as if you had already tried as a child to process your feelings with drawings and to order the chaos of the world. Does drawing have this therapeutic effect for you? If so, how has it helped you to have made this book?
Yeah, I think I've always expressed myself through drawings. I drew things that I couldn't say. Sometimes more concrete, sometimes more abstract, more complex. But somehow a feeling always crept into the drawings. The book was a kind of catharsis for me, I could get rid of things uninhibited, also because I knew that the book would only be essentially autobiographical. So I protect myself from admitting which thoughts or situations are real and which are not. My family reacted differently, they all learned something from it, both positive and negative. A lot became clear to me myself, when researching the book as well as when drawing it. Things suddenly made sense that didn't make sense before, so I was able to understand and forgive, but I also felt a lot of gratitude and appreciation. 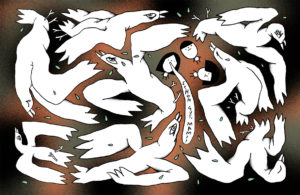 Your first encounters with art, design and painting also run like a red thread through the book. What aspect does art play in "Drei Fathers" and what connection do your fathers have to this part of your growing up?
I think art itself has always been very important to me because I associate it with my family. Art is one of the most important things in my life, so it came automatically that it has an important role in the book. I think art is what connects my mother and my birth father to this day. It's a common interest. They have the same eye for it and a love for the same things. All of them have always encouraged and motivated me in my career. In very different ways. Kiko, as he is called in the book, joked about my talent, was always very critical and yet, or precisely because of that, was extremely important for my development. He's a graphic artist and when he liked something that I did, it was my biggest compliment. It might sound tough, but I always believed I had to prove something to him and that was extremely motivating for me. My father is a photographer, he always understood my pictures (sometimes not the way I understood them) and gave them a value that I did not recognize in them myself. I found everything my mother showed me wonderful. In my eyes she is also an artist, she probably wouldn't say that of herself. Zelo, whom I depict as an archaic stone creature, is a work of art in the book itself. It is primal, like naive or primitive art. That was also an important inspiration for this book. I wanted to turn away from design norms, at least in the process of creating the book.

Which artists have shaped you the most for your work and your style? Do you also get your inspiration from comic history or especially from the art world?
I get inspiration from everywhere. There is actually something in every exhibition, on every street corner, that I like. This can be the artist's photo portrait, a sketch, or a ten by ten centimeter section from a huge oil painting. But also a strange shutter, a steel palm from a flea market or a colored piece of wood inspire me. I don't have such a concrete picture of what art is. Comics only started to interest me later, since children's books and photography were much more important to me even before that. 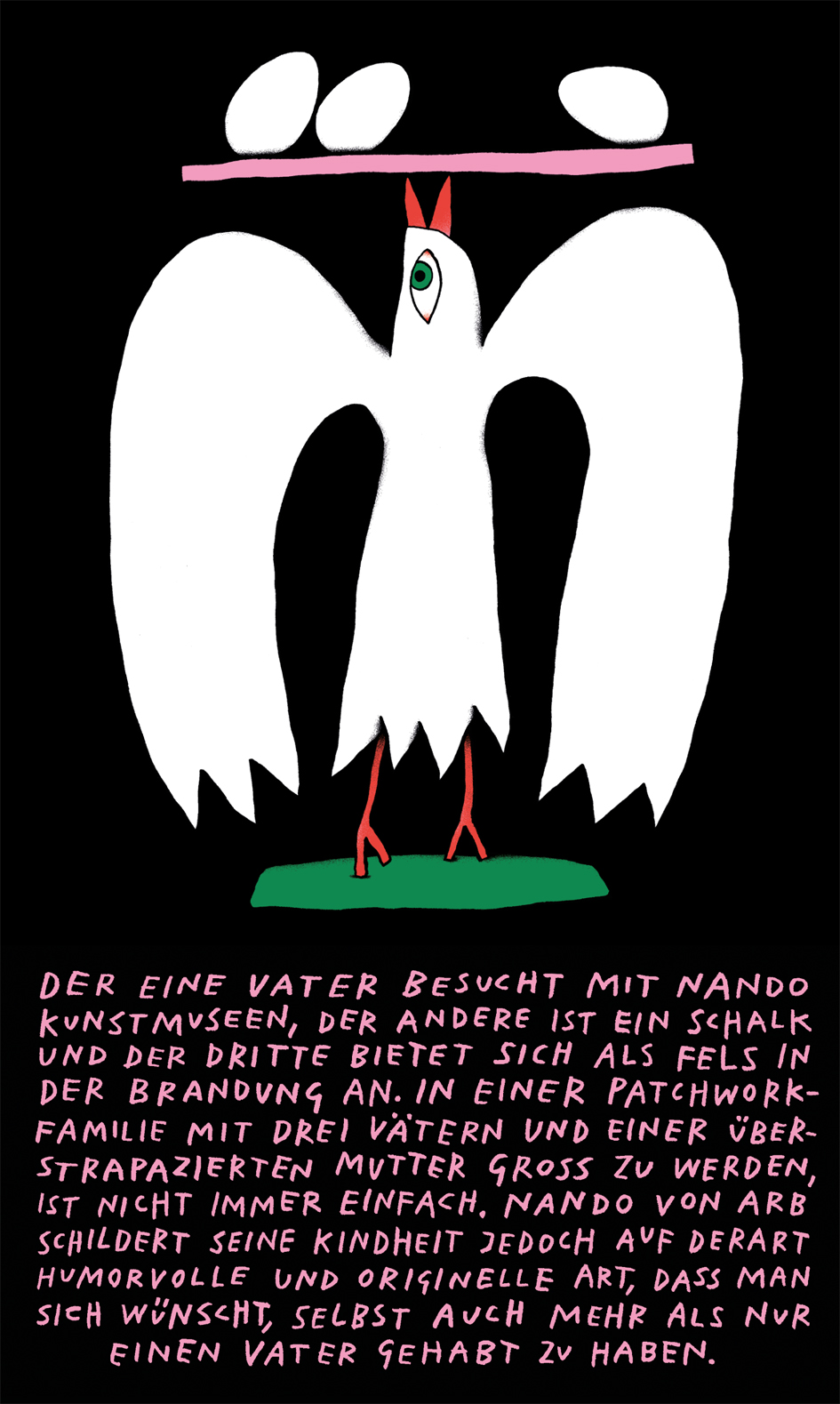