Which dynasty was ruled first in Nepal?

The oldest history of Nepal is - like so much in Nepal - closely connected with countless legends. They tell of gods, saints and miraculous events and also contribute significantly to the charm of the country. 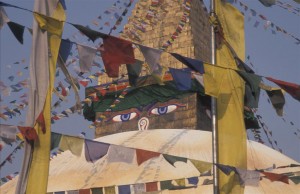 The origin of the Kathmandu valley also goes back to a legend. Accordingly, the valley in which today's capital Kathmandu is located was once a large mountain lake, in the middle of which a shining blue lotus flower grew, on which the primordial Buddha, the so-called Adi-Buddha, stands as Swayambhu - “the one who exists by himself “- revealed. To pay homage to this, the Bodhisattva Manjusri made a pilgrimage here from China. To make it easier for the pilgrims to come, he cut a swath in the southern mountain range of the valley with his sword. He created such a natural drain. Then he discovered that the Swayambhu was on a hill. He made a pilgrimage there and built a stupa with his followers, which was dedicated to the Supreme Buddha (Adi Buddha): the Swayambhunath Stupa. Today it is considered to be one of the oldest Buddhist temples in the world.

History describes the geological and hydrological situation in Nepal. There was actually a lake at the location of the Kathmandu Valley. He disappeared in an earthquake. Afterwards, numerous people immigrated from the surrounding areas and united to form the mixed people of the so-called Newar. They are considered to be the original inhabitants of the valley and gave the country its name. The Newars are a community of Indo-Aryan and Tibeto-Burmese origin, which - also due to the introduction of the caste system from India - developed an independent culture and language (Newari). They stood out for their craftsmanship and as clever traders. At that time, Nepal was already engaged in profitable trade with its powerful neighbors in the south and north and acted as an intermediary between two great powers. Little by little, a unique, unmistakable culture developed in this way. The Newars are still held in high esteem in Nepalese society.

According to the prehistory, the legends and the early history of the country, a documented historiography of Nepal begins in the 4th century AD. Since then, Nepal has been ruled by Hindu dynasties originating from India. Initially, the Kingdom of Nepal was limited to Kathmandu. Later settlements also developed in the lowlands of southern Nepal, today's Terai - with Lumbini, the place where Prince Siddharta Gautama 543 BC. Was born in BC. He, the son of King Suddhodhana of Lumbini, later went down in history as the enlightened Buddha.

After 1200 the Malla dynasty prevailed. In 1482 the Malla Empire was divided into the kingdoms of Kathmandu, Bhatkapur, Patan and Banepa. In 1768 the Gurkha armies conquered Kathmandu and established a central state. Prithvi Narayan Sha was the absolute ruler of the entire valley. He made Kathmandu his capital and founded the Sha Dynasty, which continues to this day. In 1845, the Jung Bahadur clan, who immediately called themselves Rana (= "ruler", "king"), took power. With the Kot (“fortress”) massacre, she had succeeded in eliminating almost all opponents. The Rana dynasty ruled dictatorially from 1846 to 1951 with hereditary prime ministerial office. The king only had representative duties.

During the entire Rana era, Nepal was closed to most visitors. Only a few were able to tour the country under severe restrictions. In 1950 the regime was brought down by King Tribhuvan with the support of India. Nepal opened up to the outside world. After the death of King Tribhuvan in March 1955, his son Mahendra ascended the throne. In December 1960 a new constitution came into force: the non-party system of Panchayat democracy.

After bloody unrest, Nepal finally returned to a constitutional monarchy with the 1990 constitution. King Birendra tasked the respected opposition politician Ganesh Man Singh with the formation of a transitional government to prepare elections. After a heated election campaign, the Nepali Congress (NC) emerged victorious from the first elections in a democratic multi-party system and provided Prime Minister Girija Prasad Koirala. The communists also scored more than one respectable victory. Communist slogans, which have long been scrap metal elsewhere, still have traction in a country where many residents have absolutely nothing to lose!

In 1996 the Maoist guerrilla organization Jana Yudha ("People's War") was formed and began its fight against the monarchy and the government in Kathmandu in the inaccessible valleys of the Himalayas. Their goal was to create social justice and to put an end to corruption and police arbitrariness. Meanwhile, ongoing changes of government made the country economically difficult. The population lost all trust in the rulers, whom they claim to only want to enrich themselves.

In 2001, King Birendra, who had ruled since 1972, and nine other members of the royal family were killed in an assassination attempt. After a detailed investigation, Crown Prince Dipendra is said to have committed the massacre because the royal couple refused to consent to the wedding with their lover Devyani. Gyanendra, a brother of Birendra, was crowned the new king. Large parts of the people saw the royal massacre as a plot staged by Gyanendra. He became a largely unloved, sometimes even hated monarch. Many questions remained unanswered and the clashes with Maoist rebels continued. 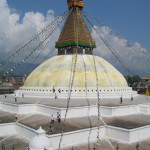 In 2002 the king dissolved parliament at the request of the government, in 2005 he deposed the cabinet, seized power completely and declared a state of emergency. More than 13,000 people were killed during the ten-year civil war. After several weeks of protests and strikes, the king had to approve the reinstatement of parliament in 2006. Girija Prasad Koirala was reappointed Prime Minister. In the same year, through the mediation of the UN, a peace agreement was concluded between Prime Minister Koirala and rebel leader Prachanda. All troops had to withdraw. The Maoists who participated in the democratic transformation process were disarmed under the control of the United Nations.

In 2007 a transitional constitution came into force, with a transitional parliament taking over legislative power. The function of the head of state was transferred to the head of government Koirala. With that the king was finally disempowered. The number of tourists rose steadily again after the armistice.

Elections to a constituent assembly took place on April 10, 2008, and the Maoists emerged victorious. In May 2008, the monarchy, which was also anchored in religion, was abolished. Nepal became a republic. In July 2008 Ram Baran Yadav (NCP) was elected the first President of the Republic. The constituent assembly elected the former rebel leader Prachanda as the new head of government. However, the domestic peace process got into a serious crisis when the Maoists called for the approximately 23,000 soldiers of their guerrilla army to be integrated into the regular armed forces. Prime Minister Dahal resigned in May 2009 after a failed attempt to fire the army chief.

The constituent assembly was given the mandate to draft a new final constitution. Due to the different demands of the various parties, the deadlines set again and again for a new constitution could not be adhered to. There should be new elections, which were finally held on November 19, 2013 after much back and forth. When Nepal will finally come to a valid constitution is open at this point in time. Nepal is still governed with a transitional constitution. Politically, the country has been at a standstill since the proclamation of the parliamentary republic.