What causes sea ice to melt

Why does the ice on the poles melt and grow the way it wants?

The two poles of our earth may look similar - but in reality they show two completely different developments. At the North Pole in the Arctic, half of the summer ice has disappeared since the late 1970s, a steady decline that is also predicted by climate models in view of global warming. On the other side of the world, on the other hand, at the South Pole, the sea ice cover of the Antarctic waters remained stable for decades and even increased with record values ​​in 2012, 2013 and 2014. Therefore, the researchers were extremely surprised when on March 1, 2017 a historic low in the Antarctic sea ice cover has been reported. It was the smallest extent since satellite observations began in 1978, namely an area of ​​about two million square kilometers, or in other words 27 percent below the average annual minimum.

Scientists find it difficult to understand these extreme differences. Why are the regional and seasonal changes in the Antarctic sea ice so different from the steady but steady decline in most of the Arctic? Why has the sea ice in Antarctica been so pronounced until now? Is this year's decline in Antarctica just a brief turning point or the beginning of a long-term development? Perhaps the sea ice cover is changing much more than previously assumed? Why do even recognized climate models, contrary to current measurements, always calculate a decrease in Arctic sea ice and not an increase? Are crucial relationships and interactions between the atmosphere, ocean and sea ice not taken into account in the models, and to what extent do humans have an influence on them? These are all extremely important questions. 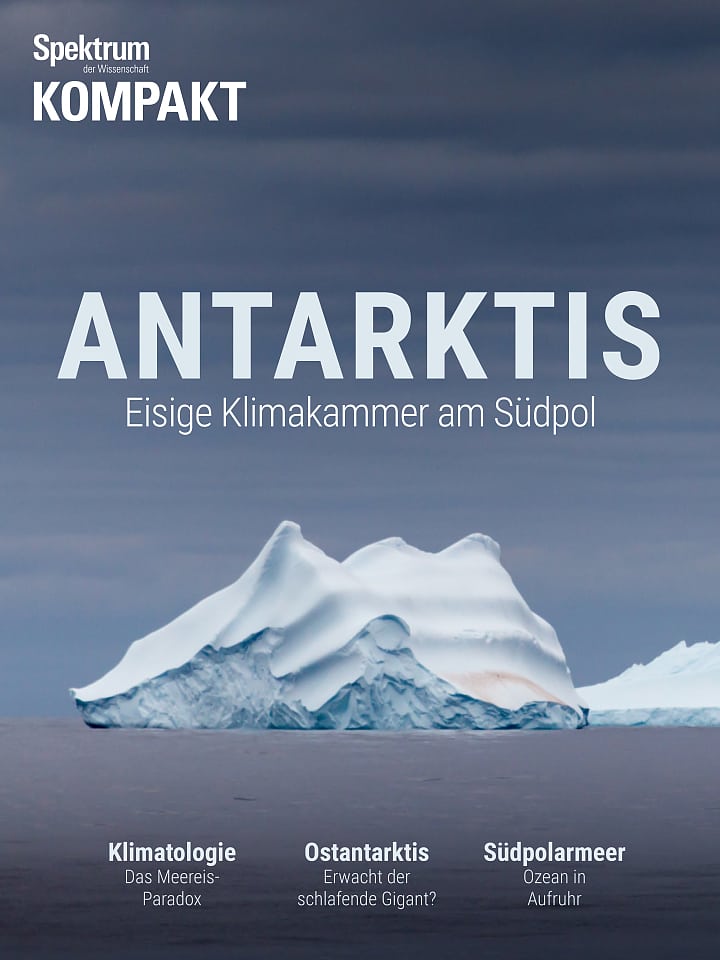 This article is contained in Spectrum Compact, Antarctica - Icy Climate Chamber at the South Pole

The processes in Antarctica affect our entire planet. For example, the southern ocean plays a key role in global ocean circulation: a frozen ocean surface changes the exchange of heat and gases, including carbon dioxide, between the ocean and the atmosphere. Sea ice reflects sunlight and affects weather systems, affects the formation of clouds and changes precipitation patterns. These in turn have an impact on the mass of the Antarctic ice sheet and on its contribution to sea level rise. Sea ice is also important for marine ecosystems and a variety of organisms such as krill, penguins, seals and whales depend on its seasonal increase and decrease.

The researchers therefore want to understand the development of the Antarctic sea ice, especially in those regions where its extent and thickness change. To do this, they have to bring together a lot of data and calculations about the driving forces behind the movement of the ice (drift and deformation), its growth and the melting processes (thermodynamics). Such data support the climate models, which should better represent the complex interactions between sea ice and atmosphere, ocean and ice layer in the future. However, this requires bundled and coordinated international efforts across all those scientific disciplines that observe the global climate and the polar regions and develop models.

Satellites provide the best data on the spatial extent of the sea ice around Antarctica. Regular observations show how the ice sheet changes over days, years and decades. Not only storms with strong winds, but also the weather has a great influence on a daily and seasonal basis. Long-term changes are driven by larger temperature and circulation patterns in the atmosphere as well as the oceans. Regular satellite observations have only been around for about 40 years. However, only with data going back further back can the changes in the sea ice be related to developments in the climate. Entries in ship logs, whaling records and coastal station data, early satellite imagery and chemical ice core analyzes suggest that the area of ​​the sea ice sheet was up to 25 percent larger in the 1940s to 1960s than it is today.

If more ice cores could be collected and more historical records could be analyzed, local developments could be identified and climatic factors could be determined that cause those Antarctic sea ice changes. This year, for example, the strongest decline in ice south of the Eastern Pacific was recorded. For example, this region is heavily influenced by the climate of the tropics, including the South El Niño Current. The researchers therefore assume that sea ice reacts strongly to distant conditions.