Will the United Kingdom forbid circumcision?

Two men are now on trial in London for the circumcision of a woman. The accused doctor allegedly mutilated the genitals of a patient in November 2012 after she had given birth to a child with his help. The second defendant, apparently a relative of the patient, is said to have asked the doctor to perform the operation. Both men assert their innocence: the woman had already been circumcised, the doctor merely restored the previous condition to stop the bleeding.

The start of the trial in London has met with great interest from human rights activists. "It would be a positive signal if the accused could actually be proven to have genital mutilation," says Adwoa Kwateng-Kluvitse from the non-governmental organization Forward, which organizes campaigns against genital mutilation. "It would be bad for our commitment if there wasn't enough evidence in the end."

The World Health Organization defines the circumcision of female genitals as the partial or complete removal of the external parts of the female genital organ without medical reasons. Girls and women who have been operated on are at risk of serious infections and even death immediately after the operation. Common long-term effects are infertility, lifelong urination and menstruation problems, and complications in childbirth. 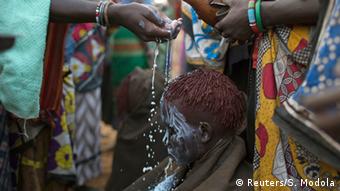 Kenyan girl at the circumcision ceremony

However, female genital mutilation is a common practice in many countries in Africa and the Middle East. Circumcision is done for traditional reasons - supposedly to prevent women from losing their virginity before marriage.

However, a significant number of women are also at risk in Great Britain: a recent study found that 137,000 women and girls living in England and Wales were circumcised. It is likely that most of them are refugees or immigrants and have already undergone the excruciating procedure in their country of origin. However, it is estimated that 20,000 girls in Great Britain are at risk of such an operation every year.

No complaints despite suspected cases

Female circumcision has been banned in the UK since 1985. Since 2003, British law has made it a criminal offense to intervene on British citizens in other countries. But so far not a single charge has been made, although in the past four years alone, the British police have received more than 140 specific indications of genital mutilation. 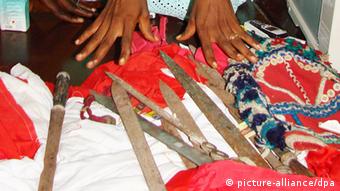 The greatest difficulties arise for the same reasons as with crimes involving sexual and domestic violence: Victims and witnesses often do not want to bring charges because they have close family or social ties to the perpetrators. "It happens in families where the girls are loved in every other way and know that they are loved," says Kwateng-Kluvitse. "In addition, the children are brought up from birth in the firm belief that circumcision is lawful."

Prosecution after circumcision is not enough, says human rights activist Kwateng-Kluvitse: "Then the girls will be traumatized for the rest of their lives. That is why we need a law that prevents genital mutilation from the outset."

Preventing circumcision, not just punishing it

British Prime Minister David Cameron announced a change in the law last July. Accordingly, parents should be able to be prosecuted in the future if they do not protect their daughters from circumcision. In addition, he approved 1.8 million euros for a prevention program. The UK Police have put in place a new policy on the recording of leads and investigations into circumcision cases. Social workers are encouraged to pay more attention to signs of impending or ongoing circumcision.

"The authorities have already done a good job of lowering the barriers so that the law can be enforced," says Mary Wandia of the non-governmental organization Equality Now, which campaigns for the rights of girls and women around the world. But much remains to be done: "To eliminate circumcision in the UK, many bodies have to work hand in hand: law enforcement, civil society and the health sector." There is still a lack of precautionary measures, shelters and the willingness of medical staff to comply with the obligation to report genital mutilation.

The upcoming trial gives the human rights activist hope: "It is a milestone," said Wandia, "on the way to an end to this extreme form of human rights violation."