Hyperventilation Syndrome: Increased breathing activity with increased ventilation of the alveoli, which increases the level of oxygen in the blood and decreases the level of carbon dioxide, which can lead to muscle cramps with the hands in paws. Hyperventilation attacks usually occur in the 2nd and 3rd decade of life, usually for psychological reasons (fear, stress, aggression). The therapy is “simple” and can usually eliminate the seizure quickly.

Immediately if the seizure cannot be stopped by reassuring the person affected.

In the next few days, if hyperventilation keeps coming back.

In most cases, hyperventilation has psychological causes. It is particularly common in adolescents and young adults. Strong emotions, stress, lack of sleep and anxiety (exams, appearances) lead to massive breathing activity in those affected. The lungs exhale too much carbon dioxide, increasing the pH of the blood. As a result, proteins in the blood plasma bind more free calcium. The concentration of free calcium in the blood drops and there are painful, violent muscle cramps, possibly with a tingling sensation in the feet and hands and around the mouth as well as the paws of the hands. Dizziness, difficulty concentrating and slight clouding of consciousness can also occur. This in turn increases the fear. A vicious circle arises from which those affected cannot get out of their own accord.

The doctor does that

Doctors rule out physical causes of hyperventilation and muscle spasm, such as: B. a severe lung disease.

Calming, persuading and rebreathing of carbon dioxide (e.g. through a plastic bag held in front of your mouth and nose) break this vicious circle. This rebreathing leads the previously exhaled carbon dioxide back into the lungs, thus normalizing the carbon dioxide concentration in the blood and the calcium is released from the protein binding. The muscle cramps end and the "seizure" is over. 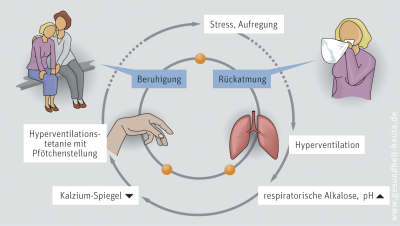 The vicious circle of hyperventilation can be interrupted by two measures: by rebreathing into a plastic bag, which normalizes the pH value of the blood, and by calming behavior by nurses and nurses in the hospital. Both measures can also be carried out by relatives on otherwise healthy people.
www.salevent.de, Michael Amarotico, Munich

Only when these measures are unsuccessful does the use of sedative medication become necessary.

Finally, the topic of the medical interview is the question of whether relaxation techniques such as autogenic training or yoga are suitable for preventing a recurrence of a hyperventilation attack. If the person concerned is faced with a mountain of unresolved conflicts, this will not be enough and psychotherapy is indicated.

The fear subsides when one realizes that hyperventilating does not endanger life. It is helpful to know the triggering circumstances in which such a hyperventilation attack can occur. If they are known, you can take targeted action against them, e.g. B. through autogenic training or other breathing and relaxation techniques.

During a seizure, breathing becomes better if you inhale briefly and deliberately exhale slowly. However, this only helps at the beginning of an attack of hyperventilation. If you miss the moment, it is good to always have a plastic bag with you in order to be prepared for an emergency or an attack.