What does Aldebaran mean in astrology 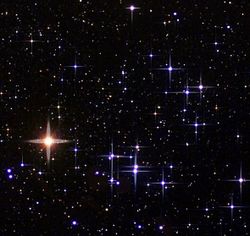 Aldebaran[1] (α Tauri) is a fixed star in the constellation Taurus. The name comes from the Arabic الدبران (ad-Dabarān) and means the following, because the star in the sky seems to follow the Pleiades.

It is part of the winter hexagon and is located in the open star cluster of the Hyades, of which it is not, however, a physical member.
Other names are Cor Tauri (Heart of the bull), Parilicon and Palilicon. With an apparent magnitude of 0.87 mag, it is the 14th brightest star in the night sky.

Aldebaran is a star system about 65 light years (20 parsecs) away. The main star is a red giant of spectral class K5 and luminosity class III. It is slightly variable with an irregular period with a brightness fluctuation of 0.2 mag.

The companion is a red dwarf star of the spectral class M2.

The apparent magnitude is 0.8 mag, the absolute magnitude -0.71 mag. The red color is also noticeable to the free-eyed observer.

Comparison of our sun with Aldebaran

Ptolemy describes Aldebaran very clearly[2]: "the one star in the head between the Hyades, which, because it shimmers reddishly, is called the torch, belongs to Mars."

Aldebaran, according to Robson, bestows honor, intelligence, eloquence, steadfastness, integrity, popularity, courage, cruelty, a tendency to sedition, a position of responsibility, public honors, increase in power and prosperity through others. But the perks are rarely permanent, and on the other hand there is a risk of violence and illness.

Alvidas describes the effect of Aldebaran as that of a conjunction of Mercury, Mars and Jupiter[4].

Mundan is said to indicate Mars or Saturn with Aldebaran for weather disasters, floods or shipwrecks.

When examining the effects of Aldebaran, it is important to ensure that it is in almost exact opposition to Antares and that both can influence each other.[5]

Vehlow describes Aldebaran as having a Mars-Neptune character, he emphasizes that the Neptunian aspect of Aldebaran has not received enough attention so far.

According to Vehlow's observation, Aldebaran causes, especially in conjunction with Mars: thunderstorms, shipwrecks; on the ascendant with sun or moon, before with the latter and with bad Neptune positions: poisoning; speculative losses in the 2nd house; in the 12th house by the moon: stroke; with Venus in love and married houses: homosexuality, in the 7th house with Venus divorce due to perversion[6]. 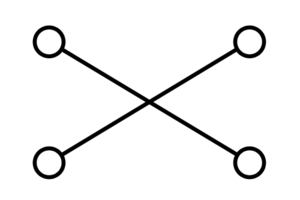 Magic symbol for Aldebaran after Agrippa