The Knights Templar were third Templars 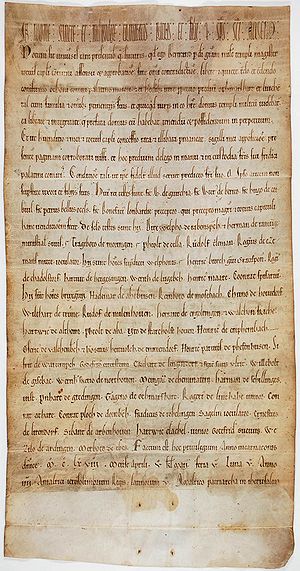 With the certificate issued in Jerusalem on April 27, 1167, the Templar Grand Master Bertrand de Blanchefort handed over the possessions of the order, located in Ottmarshart and in the Leukental, to Count Palatine Otto von Wittelsbach. (Amberg State Archives, Waldsassen monastery documents 7/1) 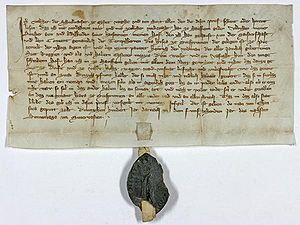 The last evidence for the Templars in Bavaria can be dated to the year 1315, three years after the official dissolution of the order. (State Archives Nuremberg, Hochstift Eichstätt Certificate 185)

Order of knights established in the Holy Land at the beginning of the 12th century. The Templars were first reliably documented in the area of ​​present-day Bavaria in 1167. Altogether, four Templars came in old Bavaria, Franconia and Swabia. The coming Moritzbrunn (district of Eichstätt) is best attested. Others existed in Altmühlmünster (Lkr. Kelheim), Augsburg and Bamberg. In 1312 the Pope abolished the Knights Templar under pressure from the French king. The successor to ownership was often the Order of St. John. In today's Bavaria, however, the Kommende Moritzbrunn still existed in 1315.

The creation of the order

In the course of the crusades, with the emergence of the knightly orders, the classic monk ideal, determined by asceticism and contemplation, was re-shaped. Roman knights gathered around Hugo von Payns (d. 1137/38) during the reign of King Baldwin II of Jerusalem (ruled 1118-1131) in 1119 to live together like the regular clerics. At the same time they devoted themselves to the armed protection of the Jerusalem pilgrims. They received the name Templars from the so-called Temple of Solomon, in the place of which they were assigned their seat in Jerusalem. The connection of spiritual life according to the evangelical councils and struggle broke the medieval class order. St. Bernhard von Clairvaux (1090-1153) achieved general recognition for them with his justification "De laude novae militiae" (1128) and developed the ideal of "monachus et miles" (monk and knight). The rule was confirmed at the Synod of Troyes in 1129.

Even before the Christian bastions in the Holy Land were lost, the Templars took over not only bases for recruiting money and men, but also new tasks in Europe. Of the more than 15 Templar settlements postulated for Bavaria, only four of the coming and several dependent goods withstand scientific scrutiny.

The Templars in Old Bavaria

Grand Master Bertrand de Blanchefort (r. 1156-1169) handed over property in Ottmarshart in the north of Dachau and in the Leukental on April 27, 1167, as the representative of his brother Otto von Wittelsbach (died 1183), who later became Duke near St. Johann in Tirol. The Preceptor of Lombardia, Brother Boniface, who was apparently also responsible for the property north of the Alps, acted as the seller for the order.

An independent commander of the Templars existed in Moosbrunn, today Moritzbrunn (district of Eichstätt). In 1251 the Procurator of the Templar Order in Moosbrunn Konrad is mentioned, who shares a fiefdom with Abbot Rudolf von St. Mang (Füssen) in Dietlried (district of Weilheim-Schongau). In 1289, the Preceptor of the Templar Order of Germany and Slavic Land, Wildgraf Friedrich, sold a farm and a half-hoof in Altenstadt near Schongau, the farm in Dietlried with the patronage right of the church there and other farms on the Lechrain, for which the von Moosbrunn brothers as previous owners Gave consent to the Premonstratensian Monastery of Steingaden.

According to a dubious chronical tradition, the brothers Burgrave Heinrich III. von Riedenburg (el. 1135-1175) and Landgrave Otto II. von Stefling (el. 1143-1175) built a Templar house in Altmühlmünster (district of Kelheim) in the diocese of Regensburg in 1155. Later the house was owned by the Order of St. John, which would have succeeded in succession to the Templars.

The Templars in Swabia and Franconia

Other Templar comers are attested for the episcopal cities of Augsburg and Bamberg. In Augsburg, the Templars owned a monastery and church on Heilig-Grab-Strasse, which according to a 15th century chronicle fell to the neighboring Dominicans. In the necrology of the Bamberg Franciscan monastery from the 14th century there is the entry of the abolition of the Templar order for the year 1311, of whose members it is called "qui ante nos in isto loco fuerunt" (who were at this place before us). In addition, in the travel bill of Bishop Nikolaus Boccasini of Ostia and Velletri (r. 1300-1303; Pope Benedict XI. 1303/04) for 1303 Templers in the bishopric of Bamberg are mentioned. The Bamberg bishop Wulfing von Stubenberg (r. 1304-1318) probably transferred the Templar ownership to the Franciscans after the order was abolished.

In the Hochstift Würzburg the Knights Templar had only 1221 with the naming of two witnesses - "Siboto de Wollechingen, Bertoldus de Mergentheim, templarii" - in a document of Bishop Otto I of Lobdeburg (r. 1207-1223) for the Bronnbach Monastery and with an entry in a Würzburg form book leave traces.

The end of the Knights Templar

The massive pressure exerted by the French King Philip IV the Handsome (ruled 1285-1314) on Pope Clement V (ruled 1305-1314), who resided in Avignon, had the result that he was repealed on April 3, 1312 before the Council of Vienne of the Knights Templar. His goods were then transferred to the Order of St. John, which only received part of them.

This dissolution took place in the Roman-German Empire in much more moderate forms than in the Romanic countries. This is exemplified by the case of the Templar sister Adelheid von Wellnheim, previously the wife of Rüdiger von Wellnheim, who joined the order. With the consent of Commander Johannes von Moosbrunn, she wanted to leave the order for health reasons. Thereupon, according to a document dated between 1308 and 1315, she received her property back. If the order were no longer able to administer the goods after her death, they should fall to the diocese of Eichstätt, possibly as a refuge for the Templars of Moosbrunn. Three years after the order was abolished, a farm in Pietenfeld (district of Eichstätt) was sold on in 1315 with the proviso that it should revert to the Templars of Moosbrunn after the death of the buyer. The coming then fell to the Order of St. John, who in 1322 sold the property complex in several steps to the Hochstift Eichstätt.

The dramatic and unusual end of the Knights Templar was the breeding ground for numerous legends and conspiracy theories that lack any scientific basis since the 18th century.