Why should idols never be worshiped

Newspaper on the net: ravolution.de

"We don’t need another hero", Tina Turner sang in 1985. Do we even need role models? Or do role models even pose a threat? What is a role model anyway? According to Duden, a "person or thing that is viewed as an [idealized] pattern, as an example to be guided by". Example, model and pattern are named as synonyms, but also hero, heroine and even idol and goddess. That sounds too much like worship to me.

In childhood we constantly use role models. Without role models we could neither walk nor speak. Obviously we need role models in order to learn the elementary things about being human. The older you get, the more independent you become - the less you need a role model. Or? As little children we might say, "When I grow up, I want to be like you!" And when we grow up, what do we say?

Of course we can always develop further, can still approach our role model. But only to a certain extent. Every person is unique and in this uniqueness can never be an exact copy of another. In general: why should that be desirable? It almost sounds like self-denial to me. I pant after a role model and forget what I can do and who I am.

I ask Annka, my roommate, if she has a role model, and if so, who that is. She names among other things Chimamanda Ngozi Adichie - even though she doesn't want to become a writer at all. She also calls Karl Marx. I get the impression that she doesn't ask to be exactly like her role models. But then what is a role model?

Psychology knows various differentiations for what is generally called a role model. There are different degrees of emulation or admiration for a person. Ultimately, however, it is the idol who is the ultimate role model. "Meyer Neues Lexikon describes an idol as" (false) model, illusion; someone or something as an object of excessive reverence ”. It is important with idols that this veneration slips into the irrational, the mystical. Unlike stars, they again have more of a role model. But it is diffuse, transfigured and overgrown. You can love a star, but stay with yourself. Idols call for allegiance. An idol is no longer a person made of flesh and blood, it is immortal. "

Margarete Mitscherlich wrote: “We have rightly been cautious about the collective worship of people. Because of our authoritarian tradition, we were very susceptible to this. We always longed for some gods to protect us. And after religion didn't seem quite right to us, we did Hitler made to god. This complete loser who really had no talent or merit. After that there could be no more gods. "

So do role models even represent a great danger? Should we avoid role models so that we don't accidentally declare them an idol or a god? Having a role model becomes dangerous when we no longer see the humanity of the respective person. When we have created an idol and emulate it without any sense of self. Then we lose what we are. Should you therefore do without role models? The line between role model and idol can be fine, but it doesn't have to be. With a little bit of sense, I can look for “healthy” role models that won't drive me away from me.

My roommate thinks that her friends are role models for her too. Simply because she likes to hear her opinion, they are important to her and she respects them. That is a very healthy attitude towards role models. We are unlikely to idolize people who are close to us anytime soon. How so? Because we know how stupid they can be! We know their weaknesses, we know their flaws, we know their humanity - and therefore we cannot see them as gods.

But what are “healthy” role models? I guess it's people who inspire me but don't dictate my life. People who encourage me to be myself. People who bring us back to ourselves when we get lost in the face of the chaos of the world - because we recognize a part of ourselves in them. 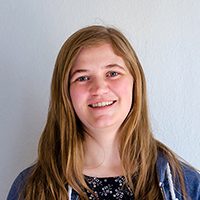 Lea Spitz, born in 1997, did - after graduating from the Anne Frank School in Rastatt - voluntary service in India for an NGO and taught children. Now studying to become a teacher in Heidelberg. For them, RAVOLUTION is a pool of inspiration. "It is interesting to see what moves the other RAVOLUTIONARIES and to bring in your own ideas."