Who was Jean Piaget 1

Jean Piaget (1896 - 1980) developed the theory of "genetic learning" (also "structural-genetic" theory), which deals with the explanation of the cognitive development of children. The focus is on the interaction between a child and its environment. Piaget is referred to as the "father of developmental psychology" (see Spektrum der Wissenschaft, 2002).

His findings are based on the observations of his own children, who made certain (thinking) errors depending on their age. With this approach, Piaget clearly differed from experimental psychologists who use (and use) complicated test arrangements for research in specially set up test laboratories.
Piaget examined the structure of children's logic on the basis of his empirical observations of natural behavioral processes and developed an epistemological justification from this: He established the connection between children's thinking and the developmental phase. In short: he devoted himself to observing the child's development of thinking.

Based on his observations, Piaget built his model of the four developmental stages, according to which every person goes through these phases or stages of cognitive development in the course of his development. According to Piaget, the phases are universal, i.e. they occur in all cultures.
Each of these stages / phases is characterized by specific features. It is particularly relevant that children's thinking differs from the thinking of an adult in every (developmental) stage. If something is plausible and logical for an adult, it does not have to appear plausible and logical for a child as well.
It is important that the levels build on each other, but the age assigned to each level is only to be regarded as a guide: the transitions between the individual levels are fluid and the respective age can vary individually (see Piaget & Inhelder, 1972, p. 153 )

The stages of development according to Piaget:

(Depending on the author, there are slight differences in the names of the phases / stages)

In case this sentence was not entirely understandable - here comes the explanation:

Adaptation (adaptation to the environment)

Scheme
A scheme forms the Basic building block of human knowledge. A schema is an organized pattern of knowledge or behavior.
Terms are branched out and networked with one another in such a way that they are brought into an (individual) logical context. A scheme serves as a 'mental template' (template), for example for an action with which one - without thinking - can act in the same way.
Schemas are individual (i.e. different in each person) categories or networks in which objects or events can be classified according to certain rules.

Please imagine how inconvenient it would be if nobody knew how to handle food: You get a slice of bread and you don't know what you can or should do with it. So give it a try ... but you cannot save the knowledge you have gained.

In the case of an infant, there are still few such schemes or "index cards" available, but these increase significantly with increasing age and with increasing exposure to the environment. The corresponding "index card" is opened when a stimulus requires a reaction - and the child 'knows' how to react.

"Piaget viewed cognitive development as an event of the constant interplay of assimilation and accommodation. Assimilation preserves and expands what already exists and thus connects the present with the past, and accommodation arises from problems posed by the environment, i.e. from information that is not to fit what you know and think. " Zimbardo & Gerrig (1999, 463)

assimilation(Alignment, approximation, amalgamation, structure preservation)
Means assimilation Incorporation of new experiences or experiences into an already existing scheme.
Through assimilation, stimuli from the environment are classified into what is already known. The existing knowledge is used to classify a situation that appears to be similar. If necessary, the perception is changed / reinterpreted in such a way that the existing cognitive structures (schemas) are sufficient to cope with the situation.

Example assimilation:
One child has already learned that
- an apple has to be brought to the mouth,
- the mouth has to be opened and
- a piece has to be bitten out.

If this child now meets a pear, assimilated the child [After all, apples and pears also look similar] and goes with the pear just like with an apple around.

Accommodation (Adaptation, accumulation, enrichment, environmental adaptation)
Accommodation means that Extension or adaptation of a scheme (i.e. the cognitive structures) to a perceived situation that cannot be mastered with the existing schemes.
Accommodation only comes about when assimilation is insufficient to cope with a situation, i.e. a situation or a stimulus cannot be integrated into an existing scheme. The existing schemes are insufficient and need to be expanded.
One adapts to what is found, whereby the scheme is expanded and thus differentiated. Accommodation means adapting the existing cognitive structures in such a way that they (again) correspond to reality and are useful for improved (since more differentiated) problem solving in the future.

If a situation cannot be mastered successfully by using the contents of existing schemes [assimilation], the corresponding scheme must be expanded to include the new knowledge [accommodation].

"From a pedagogical-psychological point of view, it is important that a learner initially interprets new things against the background of what is already known. ... There would be no reason to question and expand this knowledge if (him [Linus, example. P . 72]) would not be given an opportunity to gain experience in handling biscuits. " Rent (1998 a, 73) 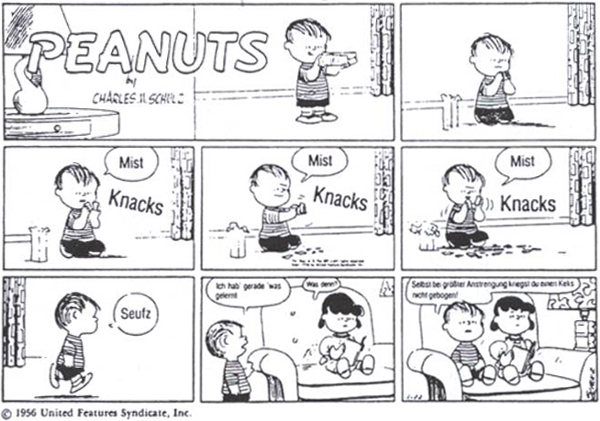 In this example, Linus first tries to assimilate: He tries to handle the biscuit as he is used to with bread: You can bend a slice of bread. After a few unsuccessful attempts accommodated he: A biscuit can Not to be equated with bread. Although both are something edible and baked, there are differences. A biscuit is different from a slice of bread - the existing scheme must be expanded (accommodation) as it is not enough.

"Indeed, one finds accommodation and assimilation at all stages of the development of intelligence, but they are always better differentiated and complement each other better and better in their growing equilibrium." Piaget (1975, p. 207)

Let's summarize:
According to Piaget, there are four phases or stages in the child's development of thinking (also: "the cognitive development").
Each of these levels builds on the previous level. Piaget believed that all children go through these stages in the same order, although the pace of development may be different. "It should be noted once and for all that age information in this book always only means an average and still approximate age" (1977, note 1, p. 119). "Lück & Miller (1999, 134) is particularly relevant Knowledge of the levels, e.g. for educators, teachers or parents.

The levels illustrate, for example, the importance of working with examples and symbols during the first years of school; this information could thus be incorporated into lesson planning.
Attempts should be made to present problems to a child at an appropriate level of difficulty according to their level of development. A very active concept of upbringing can be derived from the approaches of Jean Piaget, which is based on the world of the child (and not the world of the adult).

Overview of the four stages of development: 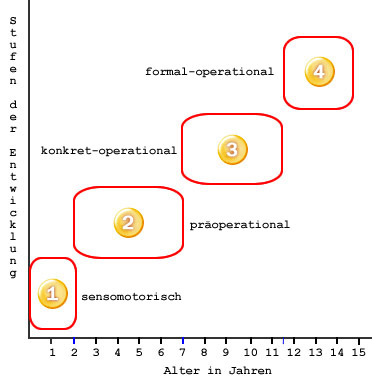 Exercise slide for the phases

Worksheet for "Piaget - Development of Thought"

An important goal of "development aid" in the sense of Jean Piaget should be to enable and stimulate independent development. Only the individual himself is active in his development. The more opportunities are offered to deal with one's environment, the more positive human development is. Piaget viewed intelligence as a special case of biological adaptation. The task of the environment consists in the provision of materials and the creation of problem situations that arouse children's interest and stimulate independent, active problem-solving.
This goal is closely related to constructivism.