What is a DC grounding system

Earthing electrical systems: you have to pay attention to this

Electrical systems in your apartment or house must always be earthed. The term grounding is closely related to the term equipotential bonding. Both terms describe electrotechnical protective measures against functional failure, against electric shock or against lightning. But there is also a specific difference between earthing and equipotential bonding - and this lies in the connection.

Difference between grounding and equipotential bonding

Because with an equipotential bonding, points or elements with potential differences are conductively connected to one another. This is intended to eliminate or prevent tensions (here: potential differences) between the earth, bodies of electrical, conductive equipment and, for example, radiators, pipelines or other external conductive parts. In contrast, electrical specialists speak of earthing when the earth is connected to a certain point in an electrical system.

This connection then has the goal of diverting electrical currents directly into the earth. In contrast, equipotential bonding primarily serves as a protective measure against electrical shocks and overvoltage caused by potential differences. It is also about electromagnetic compatibility (EMC for short). This can be guaranteed by keeping potential differences as small as possible.

What exactly does grounding mean?

2. Protective measure in accordance with the low-voltage guidelines.

4. Measure to establish a common reference potential for the safe operation of electrical systems, facilities and devices.

You have to distinguish between these earths

2. Ring earth electrode: laid in a ring around the building

This earth electrode, which is mostly integrated in the base plate or strip foundation, is preferably used in new buildings. Earth electrodes of this type consist of a strip of hot-dip galvanized steel of different lengths.

Alternatively, the ring earth electrode is often referred to as a tape earth electrode. Together with the reinforcement or the reinforcement that promotes stability, it is specifically embedded in the formwork and then concreted over. Basically, the ring earth is routed or laid on the outside of the concrete in a ring around the entire object. The ring earth electrode must always be laid upright. This ensures that it is embedded in the concrete without voids. It is important that the fresh concrete is compacted accurately. This is achieved with the help of a vibrating bottle.

Ring earth electrodes can also be retrofitted at a later date

Ring earth electrodes can also be retrofitted, for example, as part of a renovation. For the subsequent realization you will have to dig a trench no more than one meter deep around the building. In this case, however, you must not use a galvanized ring or strip earthing. For reasons of corrosion protection, only V4A stainless steel is used for subsequently installed foundation earth electrodes. This stainless steel is a permanent solution because it is considered to be extremely corrosion-resistant.

The comparatively flat earth wire is installed below or partially above the foundation level of a building. It is important that the earth electrode is distributed radially. Only then is the required contact area with the ground guaranteed. You have to make sure that all beams are brought together at a certain point and have electrical contact with one another. In this regard, six individual beams are permitted, with each individual beam being laid at a 60 degree angle to the respective following beam. If you now connect the rays with each other, you will get a field with a maximum of six meshes.

In some cases, property owners also use a deep earth electrode - also known as a rod earth - when retrofitting an equipotential bonding system. This variant is usually chosen when no other structural option is available. An earth electrode of this type is made of V4A stainless steel and has a rod-like shape. Thanks to this shape, you can ram the earth rod into the ground in a targeted manner (at least nine meters).

For driving the deep earth rod, you need professional help and special tools such as a specific pile hammer or at least a hammer head and, at the beginning, a hammer point. In addition, a soil survey must be commissioned in advance in order to identify the ideal point of impact in each case. It must also be ensured that the maximum permissible figure for the earthing resistance is not exceeded. To ensure this, appropriate measurements must be carried out.

What exactly is equipotential bonding?

The connection of conductive bodies of the electrical equipment used with a grounding or with a grounded protective conductor as well as with an explicit main grounding rail is the prerequisite for protection against electric shock. The respective guidelines and regulations are in Germany by the VDE (Association of Electrical Engineering , Electronics and Information Technology) and published within the framework of VDE standards. In the event of a fault, the automatic shutdown of the power supply functions as a priority protective measure. In Germany, all standardized terms as well as equipotential bonding and the case-specific dimensioning of the cross-sections result from DIN VDE 0100-540: 2012-06. In addition to the DIN VDE, which is valid in Germany, the IEC 60364-5-54: 2011 also counts as the guiding standard internationally.

Where is the main equipotential bonding? 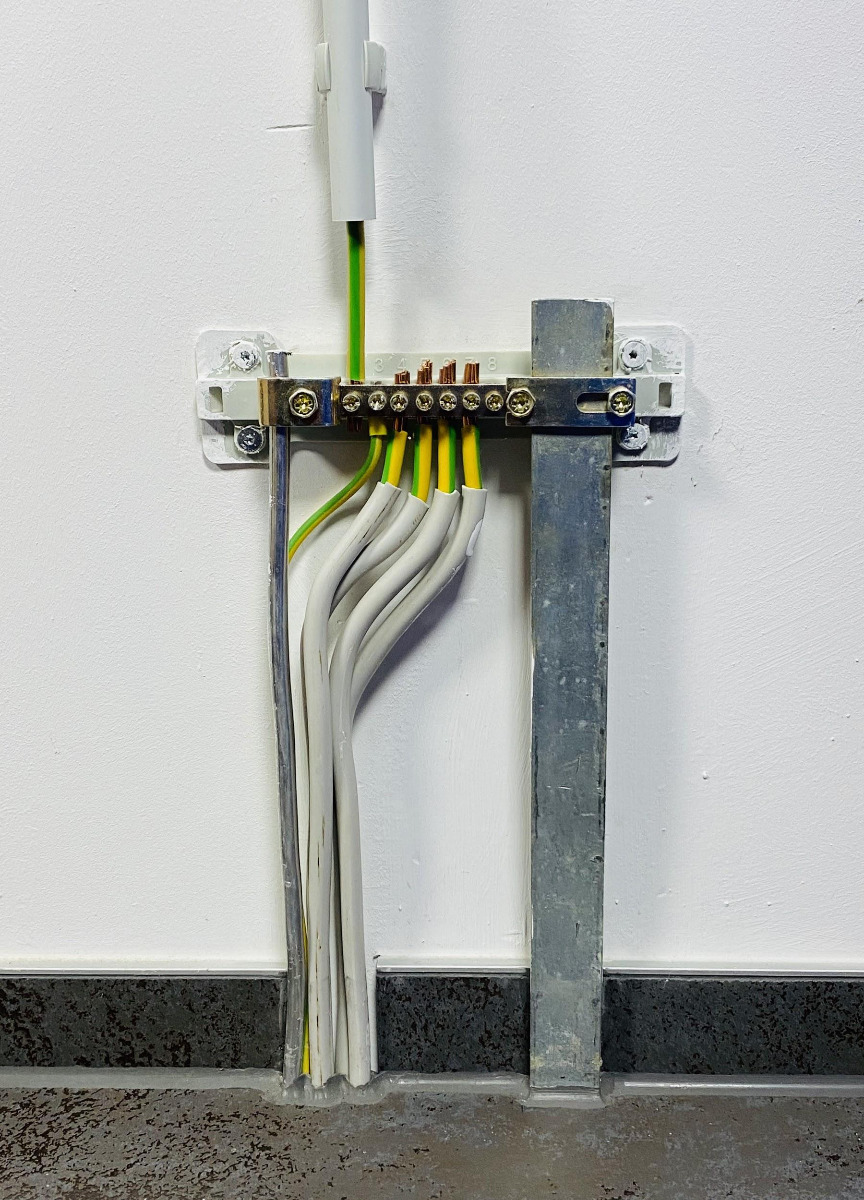 What is the job of equipotential bonding?

What is an equipotential bonding bar (PPAS for short)?

By attaching an equipotential bonding rail as an important part of the electrical installation, you connect all metal facilities and structures in a building and the respective foundation earth to a common earth potential. The rail consists of a straight metal bar on which several screw terminals of different sizes are mounted. The protective and earthing lines indoors are attached to the rail using these screw terminals.

Usually, the following building facilities in particular are connected to the equipotential bonding rail:

What is meant by protective equipotential bonding?

In your house or in a building in general there are usually external conductive parts that lead into the respective object. These can be metal water pipes, gas pipes with an intermediate insulating piece and, for example, sewer pipes. In addition to the main equipotential bonding rail or main earthing rail, there are also metal cables, heating systems, air conditioning systems in the building itself and conductive components that are within the reach of people. With the help of protective equipotential bonding conductors, you must connect all parts to the main earthing rail. In most cases, connections with copper cables that are tied to a certain minimum cross-section are used.

This minimum cross-section must be observed

A minimum cross-section of 2.5 square millimeters is required for mechanically protected installation and a minimum cross-section of four square millimeters for unprotected installation. Since 2010, buildings should only be earthed at one specific point. This will prevent potential differences from being carried over. If you run a conductive pipe into your house from the outside, you should always use an insulated pipe connection at the house connection.

In practice, professionals usually use a cross-section of four square millimeters for heating systems, accessible metal parts and telecommunications / network distributors, while at least 16 square millimeters are used for a house connection box, surge protection or satellite system. Especially with satellite systems, lightning current resistance is important. Therefore, a solid wire and not individual wires are usually used here.

How is local equipotential bonding established?

In addition, you must of course always create equipotential bonding between all electrically conductive elements in a certain area or, for example, in a room and the protective conductor for the lines involved for low voltages. This is achieved through targeted sub-distribution using a so-called installation distributor in the form of a clamping rail for connecting all protective conductors. You can connect the neutral conductors to one another using another clamping rail. This process is then referred to as local equipotential bonding. In general, this type of equipotential bonding is also carried out with copper cables that have a minimum cross-section of four square millimeters (for unprotected installation) and 2.5 square millimeters (for mechanically protected installation).

In which areas is the local equipotential bonding used?

According to DIN VDE 0100 Group 700, local equipotential bonding is generally required in areas and rooms with particular risk. According to the VDE specifications, this is necessary in the following areas:

You should always plan a spatial or local potential distribution before the actual start of construction or renovation work. Once the electrical installation has been completed, you can no longer dynamically control the spatial potential distribution in the respective building structures. Potential control is particularly popular in bathrooms. However, this is not mandatory. On the contrary: metallic showers and bathtubs no longer have to be included in the equipotential bonding.

Take the bathroom as an example: This is how you ensure dynamic potential control

Instead, an additional equipotential bonding is now required at this point, which includes all conductive pipe systems when entering the bathroom. If the existing water pipes, the shower tray and the bathtub are made of plastic that does not conduct electricity, you can even do without the integration of local equipotential bonding in accordance with the new DIN-VDE standard.

Nevertheless, experts advise not to forego the potential control within the framework of a local potential equalization. However, this has more preventive reasons. If the plastic tub is later exchanged for a steel tub, the mandatory installation of appropriate protective measures against electric shock is associated with a great deal of effort and effort.

Basically, you can implement potential control in your bathroom using a metal mesh mat. A reinforcement mat with a mesh size of 150 millimeters is used here, for example. Lay this mat as close as possible to the screed under the floor. Connect the mat with a copper line (cross-section of four square millimeters) with the local equipotential bonding.

Make sure that the copper line is continuous, adequately secured against damage and, if possible, fastened in the middle of the welded wire mesh. In addition, protect the terminal points extensively to prevent moisture penetration. If you use several individual metal grids, you should always connect them with one another so that they overlap. Alternatively, you can also weld the individual mats.

What do the individual colors of the power cables mean?

When working on the electrical installation, it is essential that you know the colors of the power wires, especially with regard to earthing and equipotential bonding.Because you must strictly adhere to the specified color scheme in any case. If cable colors are mixed up when connecting, there is a risk of electrical accidents. You have to differentiate between these cable colors: