In which direction do the tectonic plates move

Jerky movements of earth plates (scientific term: lithospheric plates) are responsible for the vast majority of earthquakes. The major earthquakes in particular are all caused by the “plate tectonics” of our planet.

What are lithospheric plates?

The earth's crust (also called the lithosphere) is the top layer of the earth. It begins at the surface of the earth and extends to a depth of an average of 35 to a maximum of 70 kilometers. This earth's crust does not consist of a single piece, but of seven major continental plates and around 50 smaller tectonic plates. How many small and tiny tectonic plates there really are is a matter of dispute in science. In addition to the plate boundaries, the earth's crust is criss-crossed by other faults that separate smaller rock packages from one another.

The seven continental plates are called: 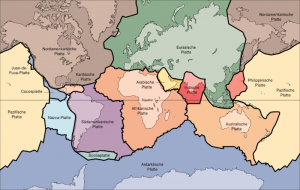 Most continental plates consist of a continental block (i.e. a solid land mass) plus the surrounding sea floor. Only the great Pacific plate consists almost entirely of the sea floor. The Eurasian plate covers the two continents Europe and Asia and also carries Germany.

A tectonic plate consists essentially of solid and at the same time brittle rock, whereby the land masses are mostly “lighter” than the comparatively heavy seabed. All solid earth plates “float” on the deeper layers of the earth (the earth's mantle). Even in the coolest places, the earth's mantle is many hundreds of degrees hot and viscous.

How and why do the lithospheric plates move?

The processes in the earth's interior that set the earth's plates in motion cannot be observed directly. No measuring devices can be brought to the required depth with their scorching hot temperatures. Therefore, the scientific knowledge is based on measurements of tectonic waves and other indirect evidence.

According to current knowledge, several processes work together and move the earth plates, especially the convection currents and the “plate pull”.

A Convection current is a gigantic, horizontal vortex made of molten, viscous rock (magma). As a result of the rotation, the convection current pushes the solid earth plate resting on top of it, like on a conveyor belt, ever further in the same direction. This movement can be several centimeters per year. Over millions of years the convection currents have shifted our continents, created new oceans and reshaped the entire surface of the earth. This phenomenon is called Continental drift and was predicted in 1915 by the German scientist Alfred Wegener.

(The explanation of the "plate pull" follows at the end of this page.)

How do tectonic earthquakes arise?

From a geological point of view, exciting things happen primarily at the edges of the earth's plates. In the “rift zones” and the “mid-ocean ridges”, which extend over thousands of kilometers, continental plates move away from each other. Rift zones are systems of rifts on the mainland; mid-ocean ridges are on the sea floor. The oceans are actually widening (divergence) along these ridges. Magma flows into the opening crevices from the underground. Submarine volcanoes are formed here - and also earthquake.

If plates of earth drift apart in one place, it is logical that plates must collide in another place (called convergence). The collision can take several forms: