How do perennial and annual flowers differ?

The life stages of flowering plants

The life cycle of annual plants (from the seed from which the plant emerges to the renewed seed formation) only extends over a year. If the seeds are scattered, the plant will die. In this case, the seeds allow to outlast the unfavorable season. In winter the seeds have a slowed metabolism (seed dormancy) and they germinate as soon as the conditions become more favorable again, especially when the temperature is sufficiently high. However, some seeds, such as those of the apple (the apple pits), must necessarily be exposed to the winter cold in order to be able to germinate when more favorable conditions return. It is possible, however, to subject them to a cold treatment in order to induce their germination artificially. There are also some plants, for example some types of wheat, that can only flower if the seed has been exposed to the cold. 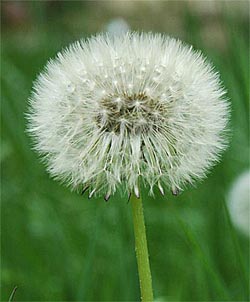 The seeds of the dandelion are achenes (closing fruits of the sunflower). Dandelion is a perennial (that is, it lives for several years), the seeds of which are dispersed by the wind.

Biennial plants do not bloom in the first year and accumulate reserve substances in a specialized organ, for example in an onion or a tuber. In winter, this organ slows down its metabolism and resumes its activity when conditions become more favorable. Then the buds of these organs develop. For this purpose, the reserves created in the previous year are first used until the vegetation body has developed so far that photosynthesis allows it to become autonomous again. Then the reproductive apparatus, i.e. the flowers, is formed and sexual reproduction can take place. It leads to the formation of seeds that survive the winter like annual plants in the dormant stage. Once the seeds are scattered, the plant will die.

The perennial plants produce seeds every year, and the plant survives the winter in a dormant state. The herbaceous plants, i.e. the small plants (which have no wood), spend the winter essentially in the form of underground, perennial storage organs (tuber roots, rhizomes, bulbs, tubers) that occasionally bear a few leaves. The trees, flowering plants, which can become very high due to the support function of the wood, also spend the winter in a dormant state, and the development of the buds in spring is ensured by the reserves in their main vessels.

Maple bud at the end of winter

Germination is only possible with a mature seed that has completed storing nutrients and is in a state of severe dehydration. In addition, as we saw above, some seeds can only germinate if previously exposed to cold. This phenomenon is called dormancy: Even under favorable temperature and humidity conditions, the dormant seed cannot germinate if it has not been exposed to the winter cold. This characteristic, limited to a few species, prevents the seed from germinating prematurely.

Since the seeds are very dry, they can remain dormant until all the conditions necessary for germination are met. Some seeds can remain dormant for several years. The germination of the seed depends on external and internal factors and manifests itself primarily in morphological changes that are visible to the naked eye and with changes at the cellular level that can only be seen under the microscope.

There are several sequential steps in germination. Since the biochemical reactions cannot proceed without water, the first condition for germination is that the seed take up water; in this way, the cells are transferred from the resting state to the active state. The seed sucks itself full of water, which can be recognized externally by its swelling and softening. The swelling of the seed is not a biological phenomenon and occurs in the same way with seeds that have been previously killed and with living seeds. It eventually causes the seed coat that surrounds the seed to burst. 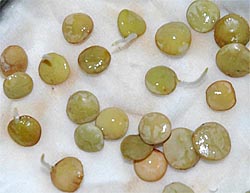 However, some seeds have impermeable seed coats that prevent water from entering. They must first be destroyed before the water can be soaked up. This destruction can be caused by a variety of phenomena, such as the action of mold or the passage of semen through an animal's digestive tract.

Not only is water required for germination, but it is also necessary that the temperature be between two limit values ​​that differ from species to species. In contrast to the dormant seed, which does not need oxygen and retains its ability to germinate even when stored in nitrogen, the germinating seed absolutely needs oxygen. Incidentally, the further germination progresses, the greater this need, and a deeply buried seed can only germinate with difficulty.

Light is not absolutely necessary to initiate germination, apart from a few special cases, but once it has started, light is essential for the normal development of chlorophyll-containing organs such as leaves. In the absence of light, germination will result in a young plant devoid of chlorophyll; this process is called gelation (etiolement).

During germination, the radicle then grows, penetrating the seed coat and growing into the soil. The roots arise from it. The germ stalk stretches and forms the stem, while the first leaves emerge from the germ bud. 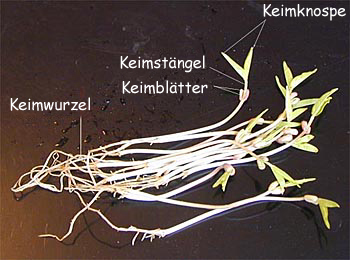 The development of the seedling and the beginning of growth are made possible by the use of nutrient reserves in the seed before photosynthesis takes over the supply of the plant. When all of the seed's reserves are used up, germination is considered complete.

In contrast to most animals, plants show indefinite growth; H. they continue to grow throughout their life. In our climate zones, the growth of perennial plants, such as trees, is discontinuous. The emergence of new leafy shoots is ensured every year by the budding of the buds that were formed in the favorable season and have survived the winter in a dormant phase.

The growth in thickness of the trunks is also discontinuous. Every year a new layer of wood is formed and the one from the previous year is added. A cross-section through the trunk shows concentric circles that correspond to the layers of wood added each year. So you can determine the age of the tree by counting the rings.

The flower corresponds to the formation of flower buds from which the flowers arise. 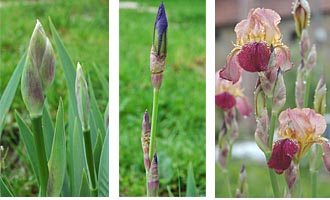 Since the flowers represent the reproductive organs, a new cycle of sexual reproduction begins with the flowering. Flowering can only occur when the plant has reached sexual maturity. In annual and biennial plants, the plant dies as soon as the seeds are formed. In our climates, the flowering time is synchronized with the seasons. Each plant develops its flowers at a certain time of the year that is specific to each species and is usually determined by weather conditions, temperature, light conditions and rainfall. Perennial plants can bloom one or more times in their life. Agaves form flowers only once after several years and then die. Most trees bloom several times. 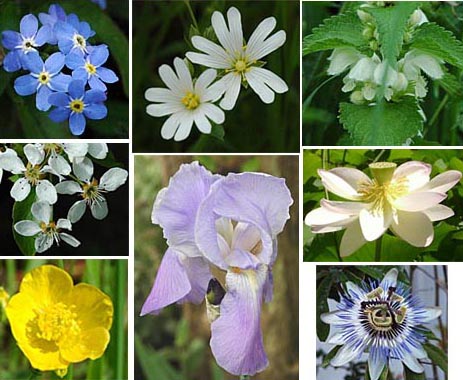 Plants are good for research and experimentation in biology class, especially when it comes to germination. It is thus possible to experimentally investigate the various factors that influence germination (e.g. humidity, type of substrate, lighting, temperature) by changing only one of these factors in each experiment.

Planting trees from seeds is more difficult. Apple or orange pits, for example, only germinate with difficulty and above all require prior cold treatment in order to make the seeds viable (dormant seeds). Conifer seeds are easier to germinate and the plants grow fairly quickly, but they are difficult to care for.

Acorns and chestnuts germinate easily, and the plants grow quickly. 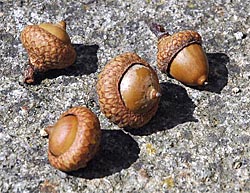 It is also pretty easy to germinate onions (e.g. hyacinth, garlic, onion). You just have to put it on a vessel filled with water so that the lower part of the onion, which bears the adventitious roots, is immersed in the water.

Technique for germinating an onion (garlic).