What is the Territorial Army doing

Before the start of their annual so-called "spring offensive", the Taliban are considering under which descriptive name they want to summarize their upcoming attacks. This year they chose "Al Khandaq" ("The Trench"). As in the past, the "American invaders" and their "native supporters" are the primary targets, meaning the Afghan government and security forces, but also NGOs. Possible peace talks have thus been put on hold for the time being.

In order to defy the strengthened Taliban, the USA and the Afghan government are counting on more soldiers and a stronger presence of Afghan and American troops in the country. President Donald Trump presented a new, more aggressive Afghanistan strategy back in August 2017. After years of reducing US troops, thousands of additional US soldiers are now to be deployed again; around 15,000 are currently stationed in Afghanistan.

At the same time, the Afghan government is planning to strengthen the Afghan security forces. A so-called "Territorial Army" based on the Indian model is supposed to remedy the situation. The Indian Territorial Army is an army reserve in which not professional soldiers serve, but citizens with civil professions. 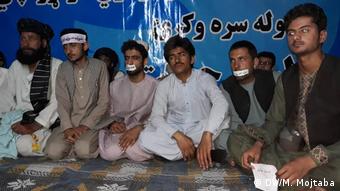 The establishment of the Territorial Army has begun

A total of 36,000 recruits are to be hired in Afghanistan in several phases. According to the Afghan Ministry of Defense, the number of Afghan security forces, including the army and police, would then amount to 390,000. Mohammad Radmanesh, a spokesman for the Defense Ministry, told DW: "We are still in the introductory phase, the process will take time. Around 350-400 men have been introduced so far. This number will increase steadily," Radmanesh said .

The "Territorial Army" is also supposed to serve only in its operational areas and not take part in further operations. In addition, their relatives only receive 75 percent of the salary and benefits that the Afghan army receives.

"The 'Afghan National Army Territorial Force' is supposed to hold areas from which the Afghan army is driving the Taliban or IS because the army has often not been able to hold them up to now," explains Thomas Ruttig, Afghanistan expert and Ko -Director of the Afghanistan Analysts Network. Whether the new militia can do that remains to be seen, Ruttig told DW.

The idea of ​​the "Territorial Army" is not entirely new in Afghanistan. The Local Police (ALP), which has been trained since 2006, works under similar conditions and has similar tasks. The difference is that the ALP falls under the responsibility of the Ministry of the Interior. It is not yet clear whether the introduction of the "Territorial Army" will supplement or abolish the local police. 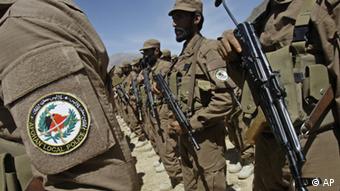 Afghan Local Police Unit in Urusgan Province. The results of ALP, founded in 2011, are mixed

However, the ALP has received a lot of criticism in recent years. Human rights organizations such as Human Rights Watch and activists complained about war crimes, human rights violations and terrorization of the population. In the past, militias loyal to the government would have endangered the security situation in the country more often than protected it. For this reason, experts and Afghan politicians fear a similar development in the new "Territorial Army".

"This plan will only create a new source of war and lead to more uncertainty," said Hashim Alokozay, chairman of the security and defense committee of the Afghan Senate, the DW. "New militias are being formed, which is not in the national interest." Thomas Ruttig is also critical of the future of the new militias. "The experience with the ALP is that it is often paid irregularly, is not otherwise reliable and in many cases harassed the local population, which often opens the door to the Taliban," said Ruttig.

In addition, experts fear that the local police and the new "Territorial Army" will get in each other's way and that fighting could even arise between the two organizations. There is also concern that armed civilians will be recruited by local warlords for their private clashes with rivals, as is already the case with the ALP.

However, the Department of Defense does not share this fear. "We only select men for positions of responsibility who have already served in the army, so the chance of destabilization is very slim," says Mohammad Radmanesh. 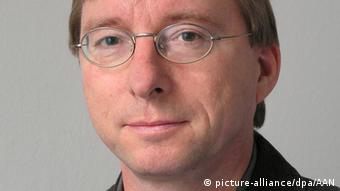 "Concept enforced by the west"

Hashim Alokozay is not so optimistic. In his opinion, the real victim is the ordinary population. “The local warlords and the mafia will only be given one more chance to continue arming and strengthening themselves. That harms the people. Afghanistan has already had enough bad experiences with arming the population, "says Alekozay.

Thomas Ruttig argues that the existing ALP units are not always problematic. Some would work well, and those are the very ones that guide you, not those that got out of hand. "But the latter are of course the problem, also because they often do not dissolve again, even if payment is suspended," said Ruttig. Overall, however, the proliferation of all possible militias represents an enormous potential for conflict for the future of Afghanistan, as it affects Afghan society It is impossible to foresee where their loyalties will go in the future. Thomas Ruttig sums up: "This concept implemented by the West is at best a short-term solution in some cases, but very problematic in the long term."