Why is China holding millions of Uyghurs

For years, human rights organizations and journalists have denounced the oppression of the predominantly Muslim Uyghurs in China. Beijing denied reports of prison-like camps holding Uyghurs and members of other ethnic groups. But internal documents of the Communist Party, the so-called "China Cables" leaked to journalists, have now provided new evidence and prove the extent of the persecution. According to this, every tenth Uyghur is stuck in a camp.

What is the cause of the conflict?

As an Islamic Turkic people, the predominantly Muslim Uyghurs in the north-west Chinese autonomous region of Xinjiang have their own identity. With around ten million members, they are the second largest Muslim population group in China. They feel economically, politically and culturally oppressed by the ruling and largest population group in the People's Republic, the Han Chinese.

In this respect, they are "culturally and spiritually closer to Istanbul than Beijing," says China expert Adrian Zenz in an interview with ARD. In 1949 the communists annexed the briefly independent East Turkestan with Soviet consent. Decades of Beijing-sponsored settlement of Han Chinese followed. The Uyghurs became a minority in their resource-rich homeland. 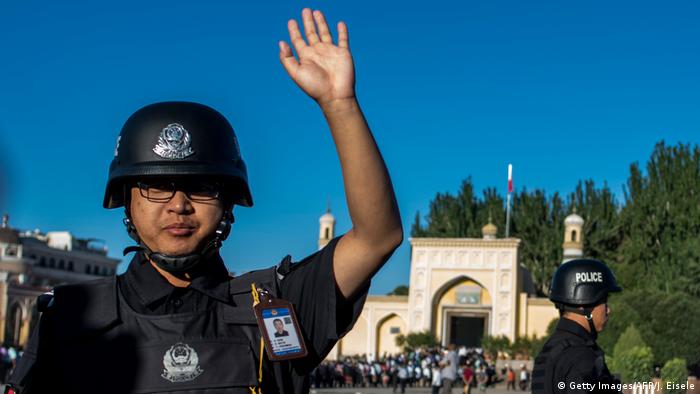 A police officer controls the entrance to a mosque in Kashgar

In 2009 the discontent escalated. The bloody riots in Urumqi, the provincial capital of Xinjiang, killed nearly 200 people. As a result, the Chinese government intensified its repression. She set up camps in Xinjiang, justifying it with "anti-terrorist measures." The unyielding toughness and at the same time obvious fear of loss of control, China demonstrates all the more since the land route of the economically extremely ambitious Silk Road project leads through Xinjiang.

What happens in the internment camps?

Voluntary Training or Total Re-education? If there was any doubt - the China Cables have cleared it up. The documents revealed a complex system of oppression. The camps, which are reinforced with walls, watchtowers and barbed wire, enable physical and mental control with a strict system. Without a trial, inmates can be held indefinitely and there is a point system for their behavior. You can call family members once a week and watch them via video call once a month. Contact with the outside world can be prevented at any time. The inmates are monitored with cameras 24 hours a day. 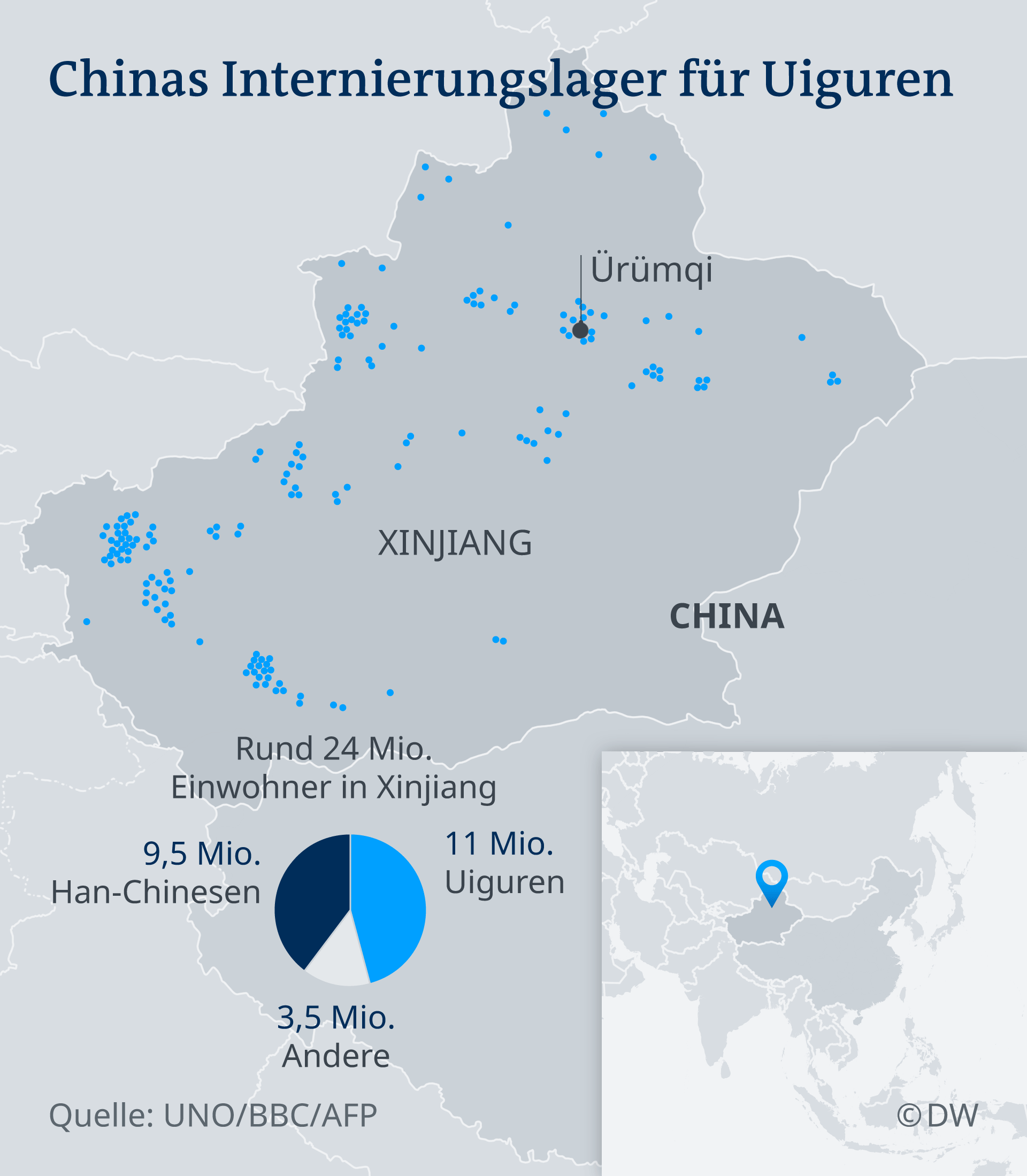 "Something unprecedented is happening there," says Asia expert Adrian Zenz. He speaks of the systematic internment of an entire ethno-religious minority. For the German anthropologist researching in the USA, the China Cables document an unprecedented campaign of assimilation, repression and re-education. "China is about integrating the Uyghurs into the Chinese state in the long term and in a very intensive way. Culturally, religiously, linguistically, in every respect. It is a cultural genocide."

Is China's allegation of terrorism against the Uyghurs justified?

According to the Asia expert Ulrich Delius, this accusation is untenable. In an interview with DW, the director of the non-governmental organization Society for Threatened Peoples pointed out that "terrorism has never been raised against the Kazakhs and Kyrgyz who were also interned. Therefore, there is no reference to terrorism allegations." In an interview with DW, Delius describes the repression of China as an "extermination campaign against Muslim nationalities". 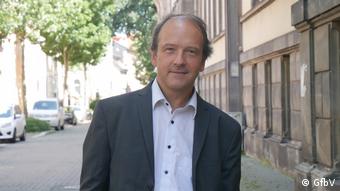 If you let state authority escalate like this, you shouldn't be surprised if the other side also reacts with violence at some point, continues Delius. He sees the Uyghur conflict as a homemade problem that has nothing to do with international terrorism. "Although the Uighurs no longer have the opportunity to use force because they are so completely monitored." Two or three years ago there were still relatively many attacks by Uyghurs on Han Chinese. "We hardly hear anything about that anymore."

How does the western world react?

While thousands of people repeatedly demonstrate for the freedom of Tibet, no masses take to the streets for the Uyghurs. One reason: Little information about the Uyghurs gets abroad. Above all, however, they lack a charismatic leading figure like the Dalai Lama among Tibetans. Even after the publication of the China Cables, the international reaction seems to be limited mainly to words. US Secretary of State Mike Pompeo called for the immediate release of interned Uyghurs and an end to the policy of repression. The US also blacklisted 28 Chinese government organizations and companies. The EU Parliament wants to discuss the issue in December. And Germany? Federal Foreign Minister Heiko Maas urged the government in Beijing to meet its international human rights obligations. 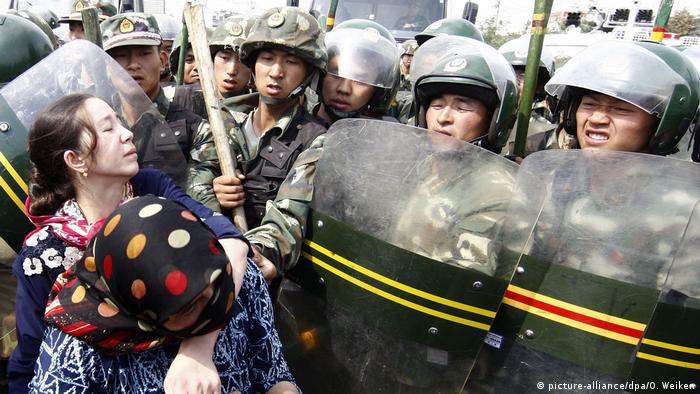 A protester defends herself against a police operation in the provincial capital Urumqi.

Asian researcher Adrian Zenz complains that Germany is not reacting sharply enough to the revelations. German foreign policy has "been shaped for a long time by efforts to achieve economic success." The director of the Society for Threatened Peoples, Ulrich Delius, acknowledges that the German side "has made intensive efforts in the last two years to address this issue at the international level in such a way that the states should take care of it." However, he stated that even in the European Union the "air for a consensus has become very thin". This makes it clear how great the influence of the People's Republic of China has become on an international level.

How do the Muslim fellow believers react?

The Arab world is keeping a low profile. While the Palestinian conflict with Israel regularly leads to rallies and demonstrative flag burning in the Islamic world, there is collective silence in the face of the suffering of Uighur fellow believers. "In principle, almost all of the Muslim states say nothing about this - although it is Muslim nationalities that are affected," explains Ulrich Delius. It is about a lot of money, about economic contacts with China. "You don't want to burn your mouth. You don't want to be in trouble." 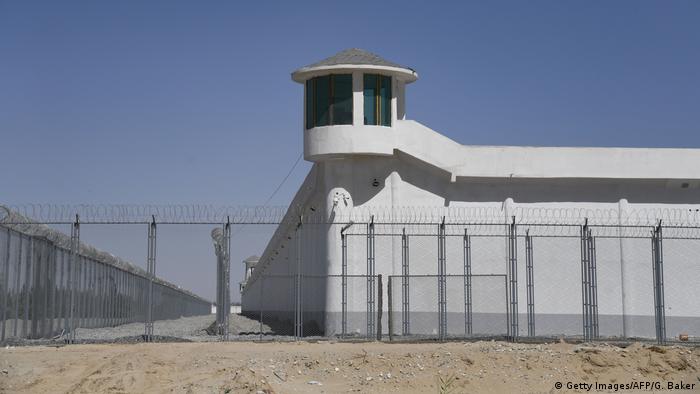 One of the camps in Xinjiang

In addition, in July, numerous Muslim countries praised China's actions against the Uyghurs and its "remarkable successes" in implementing human rights in a note to the UN Commission on Human Rights. "I think that's because these governments are often autocratic themselves. They have often committed human rights violations themselves and are not interested in beliefs or values, but rather in self-preservation," says Zenz, a researcher on Asia. Only Turkey accused the government in Beijing of a "systematic assimilation policy".

How could the human rights situation be improved?

The greatest enemy of human rights violations is always the public. The director of the Society for Threatened Peoples is convinced of this. Ulrich Delius argues that it is extremely important to create publicity. Every voice is important. "If we look at developments, it was individuals, non-governmental organizations, who ultimately forced China to commit to this program and made it clear that people would be imprisoned and held against their will."

A young woman from the United States who introduced herself as the 17-year-old Muslim Feroza Aziz has just shown how much individuals can achieve. Your initially harmless-looking instructions for lively eyelashes on the Chinese video platform Tiktok turned out to be a massive attack on the People's Republic. First she used the eyelash curler, then she asked her audience to take the cell phone and look for "what is happening right now in China, how they are building concentration camps and packing innocent Muslims (...)". The video was blocked on Tiktok soon afterwards. But several million people had already seen the political message, which is also available on Twitter.