What are the principles of hydraulics

The "lifting platform" from the aquarium shop

How can you experience the principle of a hydraulic press or a hydraulic lifting platform up close?

The following experiment offers a very inexpensive solution. The inexpensive parts for this come from the pharmacy (plastic syringes) and the aquarium shop (valves, taps and hoses).

The working material (preferably water) is drawn from a storage container (V) and transferred into the plunger system (R) with every play (up and down) of the pump piston (P). Valves (V1) and (V2) regulate the flow of the working medium. Their meaning will be discussed later. So that the plunger (R) can also be lowered again, the manual valve (V3) is necessary, which allows the working medium to flow back into the storage tank.

The valves V1 and V2 are designed as rubber lips. If the pressure on the left side is greater, the pressure force, which is known to act perpendicularly on the surfaces involved, is also greater here than from the right. This causes the lips to open and air or water can flow through. In the first phase, the pressure difference arises from the fact that the pump piston P is pulled upwards. The pressure between V1 and V2 drops slightly, this opens V1, and liquid flows from the storage vessel into the pump cylinder. V2 remains closed during this time because the higher pressure force from the right presses the lips together.

When the pump piston P is lowered, the pressure between V1 and V2 increases. The now higher pressure force presses the lips of V1 together, which prevents the working medium from flowing back into the storage tank. If the pressure between V1 and V2 exceeds the value that the plunger R exerts on the liquid, V2 opens and the working medium is transported into the press cylinder. V2 closes again at the moment when the force Fp on the pump piston falls below the value determined by the hydraulic principle. 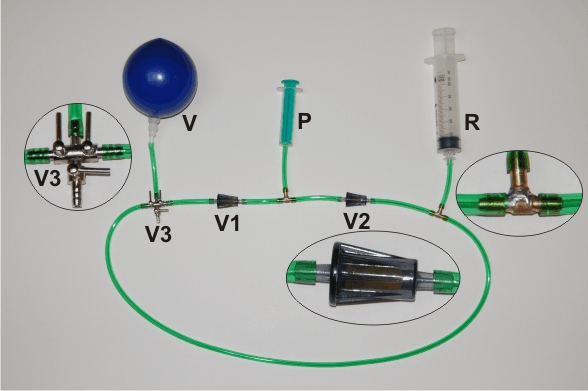 The experimental set-up, put together with parts from the aquarium shop and the pharmacy, can also simply be operated with air. So that this can escape from the storage container (moderately inflated balloon) the right hand valve of V3 must be opened, i.e. lever to the right. If the balloon has been inflated too hard, the air flows through the valves by itself and pushes the pistons in front of it. The T-pieces with which the syringes are connected to the hose system were made from brass tubing with the help of the soldering iron, but you can also get them in aquariums. Instead of valve V3, it would be less convenient to use another T-piece and hose clamps. The green plastic syringe for the pump plunger had a diameter of 17.5 mm with a nominal volume of 10 cm³, the large syringe had a plunger with a diameter of 30 mm and a nominal volume of 50 cm³.

The cross-sectional areas are calculated as 240 cm² and 707 cm², which results in an area ratio of approx. 1: 3. Frictional forces, especially present in the small syringe with plastic plunger, are not taken into account, the force on the plunger R is therefore approx. 3 times as great as on the pump plunger. Incidentally, the frictional forces on the pump piston could be reduced significantly in another experiment with a ground glass syringe.

The valve clearance already described above can then be observed by raising and lowering the pump piston. With air as the operating medium, there is a popular side effect. Because gases are compressible, a considerable amount of air can be pumped into the press cylinder. The plunger must of course be fixed to the cylinder, preferably so that it is approximately in the lower half of the cylinder. After about 7 - 8 pump strokes you will have collected so much air in the press cylinder that the piston would be pushed out completely. The pressure is increased even further, which is easily possible by translating the amounts of force. If you finally release the plunger R, it is thrown several meters through the air.

Energy considerations from the throwing height would be conceivable, but have not yet been carried out.