How do I get bulletproof trust 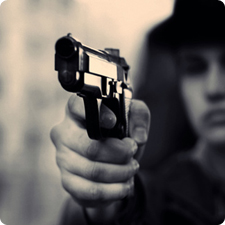 It's the classic story à la “From dishwasher to millionaire”. With $ 10 borrowed from his mother and a brilliant business idea, Miguel Caballero became the most famous Colombian tailor. His collection is now in great demand in over 22 countries around the world. And not because they are particularly fashionable or unusual, but because customers can rely 100% on the goods. This is what Caballero stands for with its name - and the employees with their lives.

Because the 39 year old Colombian has set himself the goal of making bulletproof clothing socially acceptable. That is why, in addition to the classic gun vest, he also has bulletproof shirts, vests, jackets - and even ties. The exact manufacturing process is secret, but the end products can be described as follows: The items of clothing protect up to an attack of the caliber of a submachine gun, are significantly lighter than conventional protective vests, are also much more comfortable to wear and - and that is what is special - they do not differ at first glance from normal, unprotected clothing.

The quality check takes place directly in the company: Caballero tests the finished pieces on its own employees. This strengthens trust and identification with the company, says the millionaire, and the employees should also develop a feeling for the responsibility they bear, because the smallest mistake can mean a human life. In addition, the attempt is a kind of acceptance ritual - everyone has to go through it.

An unusual business idea: from someone who set out to sell bicycles in China [...] »

A portrait. There is also shooting here, but not with lead [...] »
The 39-year-old came up with the idea of ​​designing fashionable protective clothing while studying textile design and business administration. The daughter of a well-known senator, who was constantly accompanied by two bodyguards, also studied at the same university. Caballero noticed that they weren't wearing bulletproof vests. When he asked why that was so, he received the answer: They were too heavy and made immobile.

A gap in the market was found: light, flexible and at the same time protective clothing. With $ 10 borrowed from his mother, Caballero bought a used vest like the one used by the police, studied its composition and experimented with various fillers. The result was a vest that weighed a whopping 1.2 kilograms less. The "bulletproof Armani", as Caballero is often called in his native Bogota, sold them to a security guard - and his triumphant advance began. The latest model that could be particularly interesting in our part of the world: bulletproof leather pants.