How to make a sniper nest

All game tips for Sniper Elite 3

You start the fight immediately. Kill the first two scouts to get a feel for the shooting. Work your way to the right through the trench and shoot the scout on the rock. Now you will learn how to quickly destroy vehicles by shooting at the tank as usual. Run up the ramp to the right past the tank. Collect the first letter at the top (Diary 1). Now run into the rocks. From now on you should crawl into the next area and quietly switch off the two opponents. Now take the Welrod silenced pistol, wait for the guard to turn their backs on you and shoot them. If you want to complete the challenge, you have to make six more deadly melee attacks. Sneak on, to your left is the first smoke thrower squad. First kill the guy who is slightly back and gives orders, then the shooter himself. Sneak to the right of the thrower and then immediately right again into the cave. Take out the nearest enemy under the tent. Another is to the left of it, turn right to the next thrower. Pay attention to the guard crouching between the boxes and then kill the opponents at the thrower.

Now you have two options: You can climb the watchtower and pursue the reputation of a sniper or you can creep forward. The tower is the secret sniper's nest. Click on the wooden boards to unlock it. You can always recognize such nests by the rifle with the steel helmet on it. 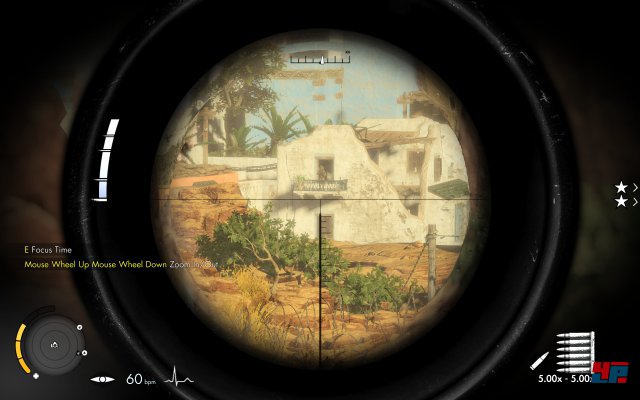 You can also complete the first long-range shot from this position (Fig. 1). Turn around and move back under the tent. Wait for the guard and finish them off. A radio operator is standing in the tent with a second letter (War Diary 2). Now creeps on to the left of the small rock. Wait for the next patrol, kill them and jump down the little rock. Take out the second smoke thrower squad. The last Nebelwerfer is a little further behind the last camp. There is only one guard left here and the crew. A bomber clears the next path. Before you finish the level, climb up the tower here for the trading cards (cards 1).

Optional destinations:
1. Eliminate the officer from the sniper's nest
2. Deactivate the searchlight
2. Destroy the fleet

Kill the first enemy with the knife. The machine in front of you makes enough noise in bursts that you can shoot undercover. Look out for the noise symbol at the top of the HUD. Take a look around with the binoculars and mark up to seven targets. Always wait for the noise and only then pull the trigger. If you're seen, get out of cover and wait for the guards to leave. Kill all the guards in the field of vision and move right through the rocks towards the watchtower. Take the information from the target (Diary 1). Move a few meters to the couple of tents. In the second you will find a letter (Diary 2). Opposite in the tent another one (Diary 3). It goes on to the second sniper nest. Put the box and the sack aside here so that it can be recognized in the targets. To achieve the secondary objective, you have to kill the officer from the sniper's nest. Kick the generator to make it crack too. Now, as before, first look at everything with the binoculars. Kill all guards in the field of vision and go right over the pass to the target tent (war diary 4). Shortly before that there should be a guard who was standing in the blind spot of the nest. Take them out and collect the next letter (Diary 5).

Run under the big rock gate on the left so that you can take a seat on the left over the pass in another nest. Kick the generator again and target the tower. Turn off the spotlight and the guard behind it. Now there are some guards standing in the blind spot. These include the two on the left in the ruined pavilion and one that is slightly offset next to it. To do this, climb over the sandbags and lie closer to the edge. So you have the advantage of the generator and more visibility. Alternatively, go down the path to the left, watch out for the first patrol and kill them with the pistol. Directly opposite in the stone house is another letter (Diary 6). Now run to the big stone building. Opposite this you can see a couple of small tents. Under the right one you collect the next letter (Diary 7). Turn around and look into the small opening in the large building. The trading cards are in this sleeping place (cards 1). Now work your way through the building. Two guards are still standing here. Crawl through the gap in the wall and sneak up to the tower.

Activate the next nest here first. From here you can optimally turn off all opponents; even if you don't have a generator to cover the shots. 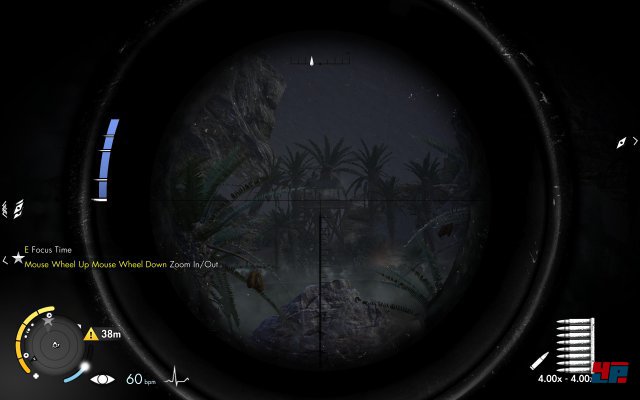 You can also do the long-range shot here (Fig. 2). You get a side mission that you should destroy the transporters. Exit the tower via the stairs and go to the large tent on the right near the barrier for another letter (Diary 8). Take care of the vans by shooting the engines through the slot on the side when the air is clear. Then collect the letter from the target (Diary 9). Keep left by the dunes and sneak them behind the ruins. Watch out for the two machine gun nests on the way, which are somewhat hidden behind a transporter. Kill all visible enemies from the dunes. Now sneaks through the narrow pass towards the final destination. Take the pistol to quietly take down the enemies along the way. The final destination should be near.

The last destination is in the big stone building at the very end. Sneak back to the machine gun nests. Stay to the right of the dunes again and take out the few opponents who have their backs to you. In the ruins behind the nests is the last free letter you need to find (Diary 10). The target person has the last one. Stay on this path and climb over the scaffolding into the building. The scaffolding is also the last sniper's nest to find. Kill the last officer and record his letter (Kreigdiary 11). Now you have to stop an armored car. Try the heavy shot or just put a landmine between the wagon tracks in the sand. Now leave the area.

Run over the bridge. Now there is a creeping passage with a lot of work for your Welrod. Just after the bridge, go right under the camp between the rocks. Keep to the left and creep forward carefully. Kill the first soldier in the machine-gun nest. Now sneak on to the right, use the trees as cover and kill the two in the next camp. Turn further to the right and clear the second machine-gun nest. Turn around and keep to the right of the bordering rocks. Here, behind the passport, is a small fire with a letter (War Diary 1). Now it goes to the big wheel. Go into the trenches.

Run to the mill and sneak between the vans. Wait for the noise and aim at the soldiers on the rock opposite. There's someone sitting in the van. So don't stand out too much, or he'll get out. Now run behind the wall to the right and take out the two patrols quietly. Sneak further into the building and do the next one. Take the information off the table (Diary 2). Go back and up the stairs at the same building. Run over the wall to the next building, climb the ladder and activate the first sniper nest. Climb down again and continue to the right on the rock. Between the sandbags by the building opposite, next to the ammunition box, is the next letter (war diary 3). You can see the passage on the right in the rock. Run through it and turn right to another hidden fire with a letter next to it (Diary 4).

Turn around and sneak right along the narrow path towards the mill. Behind it is another building. Kill the guard and jump over to the information (Diary 5). Use the generator to fire a few more face-down shots. A few more patrols should be running around on the roofs of the buildings. Note that there is someone standing directly below you on the balcony. Now work your way to the right. In the second building there are stairs and a ladder to the roof. Now jump onto the outer path and continue over it to the rock passage.